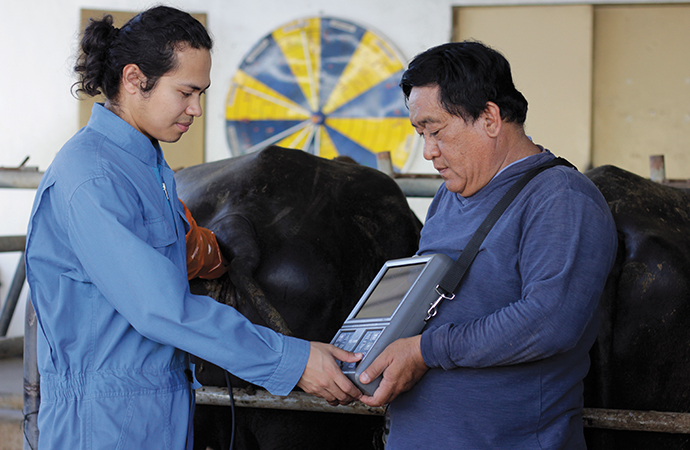 Dr. Ramesh Tilwani (left), PCC Science Research Specialist II and Rodante De Vera (right), Lab Aide II, use an ultrasound to detect whether a dam that has undergone FTAI is pregnant. Ultrasonography is a very essential diagnostic technique in FTAI as it is used for the observation of processes in a dam’s reproductive system.

The process may be tedious and needs expertise, but this protocol increases pregnancy rate in buffaloes.

The Fixed-time Artificial Insemination (FTAI), compared to the “ordinary” Artificial Insemination (AI) breeding technique commonly used in dairy buffaloes and cattle, is proving to be a more efficient way to increase pregnancy rate in animals, according to published researches.
It, however, carries some limitations that had been observed.
At the Philippine Carabao Center (PCC), a new FTAI protocol was studied by scientists and researchers and it proved to increase pregnancy rate in buffaloes by 26.41% compared to the widely-used FTAI protocol OVSYNCH.  The team was led by Dr. Eufrocina Atabay, Scientist I.

AI is a technique where semen is collected from the male and then after processing is artificially introduced into the female reproductive tract.

AI in buffalo, however, is constrained by difficulties in estrus detection in this animal. Likewise, finding the right timing to conduct it is difficult.

An alternative method to increase the number of pregnancies in buffalo through AI is by using a protocol that does not require estrus detection. This is called FTAI.
Historically, Ovysynch is the widely-used FTAI protocol. It uses the hormone GnRH and prostaglandin (PGF2α), which had been initially adopted in PCC’s FTAI activities in buffaloes.

The major effect of Ovysynch procedure is the tight synchrony of ovulation among animals and the conduct of AI without the need for heat detection, according to the researchers.

They explained that with ovulation synchronization, there is a better probability that the ovum [egg] of the cow [female buffalo] is released from the follicle after AI is done. Therefore, there is a higher possibility that fertilization will occur. On the other hand, estrus is instigated in ES but there is no certainty of the time when ovulation will occur.

“However, this protocol’s effectiveness can be influenced by many factors that can limit its widespread application and its full potential for buffalo production,” the PCC researchers said.

They called this protocol CIDR-Synch-hCG.

Its difference from the original FTAI protocol is the insertion of Controlled Internal Drug Release and the injection of human chorionic gonadotrophin (hCG) hormone.

The result of the study comparing Ovsynch and CIDR-Synch-hCG protocol showed that the former resulted to a conception rate of 31.63%. This outcome improved when CIDR-Synch-hCG was used, which resulted in 58.04% pregnancy rate, showing a 26.41% difference.

Currently, CIDR-Synch- hCG protocol is being used in the expanded FTAI activities in the PCC Regional Centers and some multiplier farms in the country.

Other than FTAI, Enhanced AI is also explored by the same group of researchers.

“It is called ‘enhanced AI’ because we enhanced the original AI protocol,” Dr. Eufrocina explained.

The team compared four AI protocols, including the original AI protocol, and one stood out to have caused the highest pregnancy rate. In this protocol, the hormone hCG is also used instead of GnRH, which was used in the other three treatments.

The team has also identified gaps and concerns that lead to low reproductive efficiency in animals.

With this, they devised a strategy, which they called the triple E strategy. The three E’s stand for Enhancing Pregnancy Rate, Early Pregnancy Diagnosis, and Effective Rebreeding Program.

“Good nutrition and good health condition are important for buffaloes to have better chances of getting pregnant,” explains Dr. Edwin.

Based on the Triple E Strategic Framework, ensuring good health condition and nutrition is followed by the breeding techniques FTAI and Enhanced AI (including OPU/VEP/MOET). These are perceived to lead to enhanced pregnancy rate.
After which, early pregnancy diagnosis should be done through the use of ultrasonography, progesterone, and Pregnancy Associated Glycoprotein test.

The next stage, she said, will be the Effective Rebreeding Program where rebreeding is administered to non-pregnant buffaloes.  The three E’s have been considered as a cyclic process, she added.

“There still are many things to do to improve our breeding program,” Dr. Edwin said.

He assured, though, that they are doing their best to develop breeding technologies and be able to help more carabao owners.