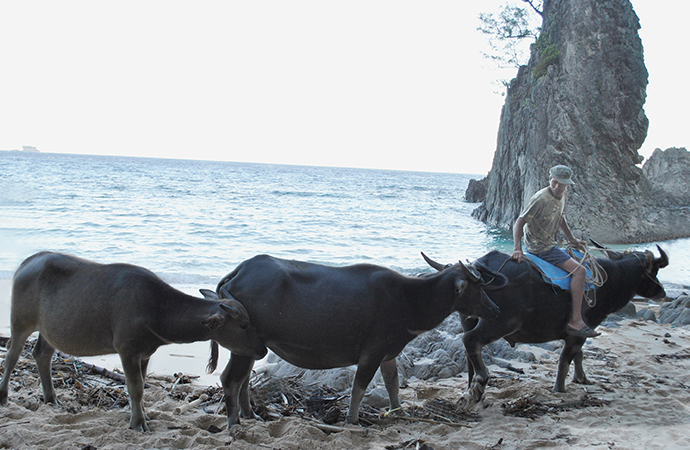 A Calayano buffalo farmer with his carabaos. Photo by LPVillamor

Revisiting the carabao sanctuary in Calayan Island, a 15-hour travel by land from the Philippine Carabao Center headquarters in the Science City of Muñoz, Nueva Ecija, one would immediately feel relieved of the long haul because of the raw beauty that is awaiting to be revealed! A warm greeting from a Calayano even makes the long trip worthwhile.

The revisit was part of PCC’s continuing effort to support the local farmers and local government units (LGUs) since the island was first explored as a sanctuary for swamp buffaloes in 2015. Among the important matters that were tackled with key stakeholders included the carabao-based program, species identification of a distinct Calayan swamp population, and overseeing the construction of the PCC communal animal facility in the island.

The goal was for PCC to select and buy at least 31 bulls from the local farmers for use as initial stocks for conservation.

The on-site inventory for bull selection was based on genetically identified animals as swamp buffaloes and according to morphologic traits such as height at withers, heart girth, and body length.

With the aim of the project to identify and discriminate breeds of native carabaos in the Philippines, Calayan swamp buffaloes in the area were previously included to establish the morphological traits and to collect blood samples for molecular characterization. Preliminary results of the analysis identify the Calayan swamp buffalo as a significantly distinct breed in Luzon. This provides baseline information to understand the genetic diversity of the species in the country toward a strategic breed conservation, management, and utilization.

Lino Llopis, the Municipal Agriculture Officer of Calayan, said, “This new information about native carabaos will continue to motivate farmers to protect and strengthen the health, nutrition, and propagation of their animals.”

“After five years, we will have a  known breed or Calayan native carabao  produced from the young bulls. We can collect fresh semen from these bulls so that artificial insemination can be done simultaneously with the selection,” Director Rellin shared his vision about the program.

He added that calves that will not be selected for breeding will be fattened for draft purposes or for meat processing. Trainings and other development interventions will be conducted in support of the program.

The communal animal facility intended for the conservation of the native swamp buffalo is currently being built on 100 hectares of land donated by the LGU of Calayan and is expected to be completed by the end of this year.  The facility can accommodate at least 40 native carabaos, which will be the initial stocks for breeding and conservation. Complementing this animal facility is an office that will host PCC researchers and technical personnel who will be visiting the island from time to time to oversee the development of the sanctuary.

While it takes a long trip to get to the island, the vision to transform Calayan into a vibrant community of progressive native carabao owners is not far-fetched with the locals’ positive outlook of the Carabao Development Program. With PCC at the helm, this vision is sure to come into fruition.