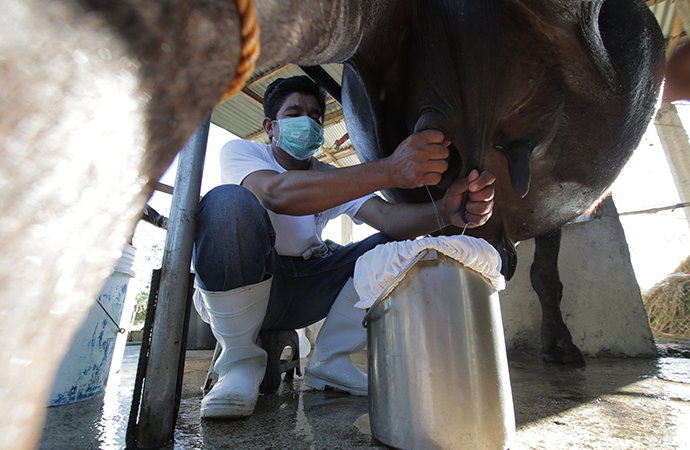 There’s really no big, hidden secret if one is bent on chalking up in record books about the high milk production capacity among dairy buffaloes.

Take it up from the experts. And one of the factors is the big letter “N”, which stands for “Nutrients”.  Dairy buffaloes must partake sufficient nutrients to reach their optimum milk production capacity. What must be borne in mind always by the dairy farmer, not just an appendage, but also a part of his being is the aphorism, “They (the dairy animals) are what they eat.”

In the program “Enhancing Milk Production of Water Buffaloes Through S&T Interventions” of the Philippine Carabao Center (PCC) and the Philippine Council for Agriculture, Aquatic, and Natural Resources Research and Development (PCAARRD), nutrition is one of the more important aspects underscored.

In the program, one of the components emphasized is the project “Development of Feeding Protocols and Practices to Support the Nutritional Requirement of Dairy Buffaloes”. It is spearheaded by Dr. Daniel Aquino, center director of PCC at Central Luzon State University (PCC@CLSU).

According to Dr. Aquino, the three-year project is aimed at increasing milk production of dairy buffaloes, more specifically their average daily milk production from 4.5 kg to 7kg through the establishment of a year-round practical feeding system using nutritionally complete homegrown forages.

The project is in line with the program’s goal of increasing the milk production of purebred dairy buffaloes in Nueva Ecija, as the National Impact Zone of the PCC’s Carabao Development Program, from 500,000 kg to 2,000,000 kg and of crossbred buffaloes in San Agustin, Isabela from 17,000 kg to 190,000 kg within the program implementation period.

According to the research team, among the problems they gathered through survey questionnaires and interview with select dairy farmers in Nueva Ecija and San Agustin were lack of food supply, poor feeding management, dearth of forage garden and failure to follow standard feeding ration.

“The project will help find solutions to the problems identified. So we potted more than 600,000 pieces of legumes at the PCC@CLSU in Nueva Ecija as forage nursery. We distributed the legume seedlings and grasses to select farmers for homegrown forage production,” Christian Lacanilao, PCC science research assistant and one of the members of the research team, said.

The selection of farmers was based on the current number of animals raised, expanse of area of plantation, their interest and commitment to participate, readiness to utilize their available resources for the implementation of the project and willingness to record and share relevant data that will be gathered from the project.

Lacanilao added that the kinds and bulks of grasses and legumes that the farmers planted depend on their adaptability to sources of water, whether the lands are rainfed or irrigated, annual fodder requirements, and the standard ration to be followed in order to achieve a year-round consistent feeding of the dairy buffaloes.

A total of 134,420 potted legume seedlings (Gliricidia sepium, Leucaena leucocephala, Desmodium rensoni, and Indigofera anil) and 619,000 cuttings of Pakchong were grown and distributed to 60 dairy farmers in rainfed and irrigated areas in Nueva Ecija. In San Agustin, Isabela, 29,250 volumes of legume seedlings were distributed to 33 dairy crossbred owners.

According to Lacanilao, the research team also planted improved grasses (4 hectares) and legumes (6 hectares) in Digdig, Carranglan, Nueva Ecija for commercial seed production. The harvested and packed seeds, and other forms of planting materials like seedlings, cuttings will be commercially available to farmers and can be bought by interested parties at the Dairy Box (a products outlet near the PCC National Headquarters), he said.

One of the interventions in the project is to transform traditional farmers into science-based farmers by producing and utilizing sustainable supply of homegrown improved grasses and legumes and development and adoption of improved feeding management system.

“With year-round supply of homegrown forages, the farmers will adopt intensive system of management, thus, the problem of liverfluke infestation among dairy buffaloes can also be addressed,” Dr. Aquino averred.

He added that it is important for the farmers to have a standard ration (grass-legumes-feeds) for their buffaloes. Grasses will serve as rice of buffaloes while the legumes distributed by the research team will serve as their viand.

“We compute the feeding requirements for one year based on the number of animals raised. Usually, we give 70%-80% of grasses and 20%-30% of legumes,” Dr. Aquino explained.

The team is currently conducting different actual feeding trials for growing and lactating buffaloes. The trials were subdivided into two groups, namely: control (traditional feeding) and treated (formulated ration), which consist of 10 buffaloes each, to determine the effects of the two feeding systems in terms of the average daily gain of growing buffaloes and milk production of lactating buffaloes, respectively.

Other than that, the research team also conducted calf rearing trial using milk substitute to increase calf as well as milk production of the dam. They were also divided into two groups. Group 1 is the control group using the raw milk for feeding while group 2 is the treated group using milk replacer.

“We are expecting that once we established good BCS of animals, they will be receptive in terms of reproduction. This will also result in reduced mortality and enhanced milk production. That’s the role of nutrition in attaining our target of two million liters of milk production,” Dr. Aquino stressed.

Although the project is still ongoing and is expected to end in February next year, Ferdinand Urbano of “Nag-iisang Masikap Multi-Purpose Cooperative” in General Natividad, Nueva Ecija, and one of the beneficiaries of the project, already has his initial observations of the good impact of the project.

He observed that after he adopted the “grass-legumes-feeds feeding” technology, his buffalo becomes sexually receptive. One month after its parturition, it already got pregnant.

“I used to feed my buffalo with just grasses because I didn’t have a forage plantation area before. Thus it didn’t get pregnant easily. After I adopted the feeding technology, I observed that when my buffalo gave birth, its BCS remains the same,” he attested.

He added: “Improved feeding management system is of great importance to the milk producing capacity of our buffaloes. I myself witnessed that.”

Aside from nutrition and feeding management, other components of the program include “Reproductive Biotechnology”, “Animal Health Management”, “Milk Quality Evaluation and Safety Assurance”, and “Field Application of Science-based Technologies to Increase Milk Production”.