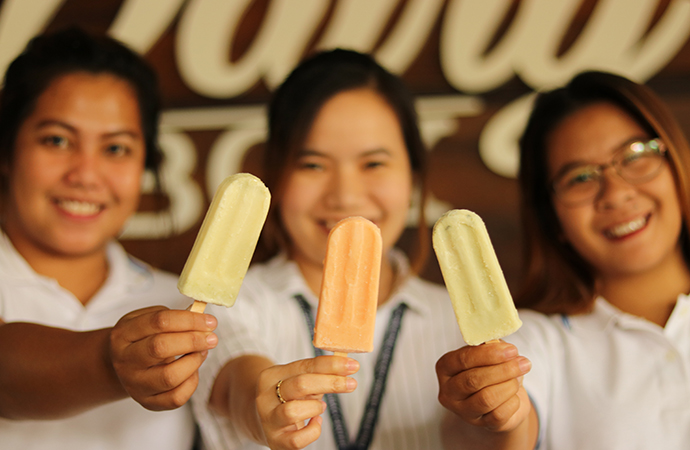 Ice cream bars made of carabao’s milk and with a full range of flavors from “malunggay” (moringa), “carrot” to “ampalaya” (bitter melon).

To beat the heat, customers in Science City of Muñoz splurge on a refreshing frozen dessert laden with nutritious ingredients – carabao’s milk and a choice of malunggay, kalabasa, ampalaya, and carrot flavors. It is handy, too, as it is solidified in a stick.It’s called “Veggie Ice Cream Bar”.

It is similar, but not the same, as that of a popsicle which is also popularly called “ice drop” that doesn’t contain an ice cream.

Historical notes say the ice cream bar on a stick was first developed in the United States in 1920 bearing the name “I-Scream Bar”. It used to be confused with popsicle then.

Several brands of this product have been the favorite of people looking for frozen dessert. But the newly introduced “Veggie Ice cream Bar” here capitalized on fresh carabao’s milk and vegetables as main ingredients of this product.

“It is designed for those who want to be refreshed and at the same time get a nutritious treat,” said Margerie Villoso, plant manager of the Catalanacan Multi-Purpose Cooperative (CAMPC), that produces this “ice cream with a twist”.

It was developed in 2016 and was submitted for sensory evaluation of the Philippine Carabao Center (PCC). Its mass production was last year when the co-op acquired a machine through a soft loan.

The CAMPC is one of the 53 dairy cooperatives in the province assisted by the PCC through the entrustment of purebred dairy carabaos and in providing technical know how on carabao-based enterprises, one of them milk-based entrepreneurship. Based in Barangay Catalanacan here, the members directly sell their raw milk to the cooperative which then uses it for various milk-based products.

The Philippine Rice Research Institute (PhilRice) which is also based in this city, also provided assistance in the development of this novel ice cream product, said CAMPC chairman Arturo de Gracia. The staff of the agency’s food chemistry division helped in determining the right mix and make for the product, he added. A stick sells at Php20 (non-coated bar) and Php25 (chocolate coated bar) at the “Dairy Box,” the co-op’s products’ outlet near the “Milka Krem Processing Plant and Outlet of the PCC along the Maharlika Highway here (KM 151).

The concept of producing ice cream bar laden with different choices of vegetables was started during the time of the co-op’s former chair Leoncio Callo. It is an addition to the array of other milk-based products of the co-op like sweet macapuno, macaroons, leche flan, bibingkang kanin, bibingkang gatas, pandan-flavoured bibingkang kanin, and its best-selling espasol de leche.

In making the Veggie Ice Cream Bar, about 2.25 liters of milk is used per batch of 300. The vegetables are cooked then blended and mixed with the milk and other minor ingredients. Then the machine finishes the job which comes out with a stick similar to that being used by doctors as tongue depressor.

The co-op employs three workers specifically to produce this product.

Among the four variants, the malunggay-flavored ice cream bar is the bestseller, Villoso said.

“It is the milk ingredient that crosses the taste of the vegetable. The excellent taste of the carabao’s milk makes the product very delicious,” she said. “Young and old alike are coming to our outlet looking for this product especially now that the heat factor here is almost intolerable,” she added.

But the demand for it is expected to increase this May, which is traditionally the hottest month of the year in this province.