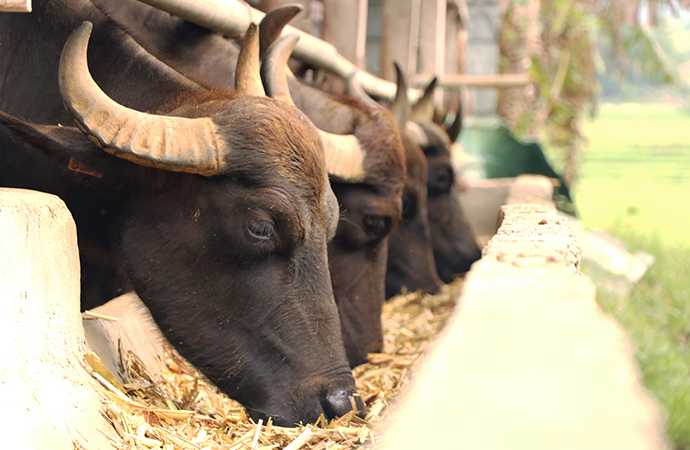 The PRDP aims to “establish a modern, climate-resilient and market-oriented agri-fishery sector.”

Further enrichment of the carabao industry in Region 2 and 7 is to be expected through the utilization of the fund given by World Bank for the Philippine Rural Development Project (PRDP).

The PRDP aims to “establish a modern, climate-resilient and market-oriented agri-fishery sector.” It was deemed that through the partnerships between the Department of Agriculture and other government agencies and offices, local government unit (LGU), and private sector, rural life can be uplifted.

PRDP and its benefits

The project has four components that includes I-PLAN for planning, I-BUILD for infrastructure development, I-REAP for enterprise development, and I-SUPPORT for project implementation assistance.

According to Hector Tabbun, Chief, DA Regional Agriculture and Fisheries Information Section of Field Office No.2, PRDP started in 2014. The Philippine government received Php27.5 billion loan from the World Bank that now serves as the PRDP fund.

“PRDP not only involves business but there are also farm-to-market roads that apart from being intended for dairy and product transportation, can also be used by everyone,” said Dr. Caro Salces, PCC Deputy Executive Director.

In I-REAP, the business plans of IFC, RTPFC, SADACO and BODACO were approved. The help they will received from PRDP includes various equipment and facilities for carabao raising and milk processing.

Connected to the I-REAP component is I-BUILD which refers to the construction of roads, buildings, and structures such as animal shelter milk parlour and processing facilities.

The PCC as an agency that focuses on carabao industry, is one of those who are helping and guiding the beneficiaries.

“Mainly, we help them by providing knowledge on the propagation and right management of buffalo to increase dairy production,” said Director Franklin Rellin of PCC at Cagayan State University (CSU).

The PCC also provides seminar to its assisted cooperatives on the production of quality dairy products.

Relating to PRDP, Director Rellin pointed out that PCC at CSU created a Value Chain Analysis (VCA) on dairy for year 2014-2015 in Region 2.  The VCA was used to determine the considerations and possible problems in the production, collection and marketing of milk or dairy products. VCA was also used as a basis for the Provincial Commmodity Investment Plan and Business Plan which are both requirements in PRDP.

Overall, the said beneficiaries will receive up to Php30 million worth of help under the I-REAP component.  IFC, RTPFC and SADACO are in Region 2 while BODACO is in Region 7.

Integrated Farmers Cooperative (IFC).  The IFC has about 200 members who are dairy, corn and rice farmers. The cooperative produces at least 50 liters of milk a day.

The total grant that IFC will receive under I-REAP is Php11, 657,075.  So far, IFC had already received a new delivery car, a new building and equipment for processing.

“With the help from PRDP, not only the transportation cost in milk delivery was lessened but also we can increase the production of our dairy products by using the new equipment granted to us,” Juan Abagin, manager of IFC products outlet, stated.

Rang-ay Ti Pussian Farmers Cooperative (RTPFC).  The wide agricultural fields and the 1,247 recorded count of caracow by the municipal agriculturist in 2014 depicted the high potential of Alcala in dairy where RTPFC is situated.

“PCC gave us buffaloes for milking. Before, we are earning three 50ml bottles of milk from a native carabao, now it became possible for us to get three liters per caracow,” Dolores Sayo from RTFPC said.

In PRDP I-REAP, Php10,616,595  is the total value of the cooperative’s receivables. RTPFC had already acquired milk cans, freezer and a transport vehicle.

Also, in connection to I-REAP is I-BUILD where construction of animal shed, milking parlour and dairy processing area and outlet had begun. The construction of a farm-to-market road was also started to enable efficient transportation of the cooperative’s products.

SADACO is comprised of dairy farmers from the said town. It is being assisted by PCC by making sure that the milk they collect is of good quality and safe until processed into various products.

About Php8.5 million is the grant that will be given to SADACO in the I-REAP component.

Bohol Dairy Cooperative (BODACO). In 2016, the Bohol Dairy Producers Association (BoDPA) was registered with the Cooperative Development Authority as BODACO. Its members are from Ubay, Mabini, Alicia, Dagohoy, Carmen and San Miguel in Bohol.

“Although we are using the name BODACO, it was decided that BoDPA will still be used since it was approved by PRDP. At present, BODACO and BoDPA exist and work together in managing their operation,” Guillerma Abay-Abay, PCC Carabao-Based Enterprise Development Coordinator, said.

“Through the help of PRDP, we hope that we can prosper our livelihood in dairying,” Lita Aranas of BoDPA added.

According to Dr. Salces, PCC Deputy Executive Director, PCC helped the cooperative in the creation of a six-year business plan proposal and the agency is also by their side in executing the plan.

Overall, PRDP allotted about Php9 million worth of help under I-REAP for BODACO. It involves equipment and other related needs in regards to the cooperative’s business plan.

There are many blessings brought by carabao-based livelihood. Apart from fresh liquid milk, the processed products from milk like chocolate milk, yogurt, pastillas, ice cream and many more, give additional income to farmers. The opportunity for IFC, RTPFC, SADACO and BODACO to be among the beneficiaries of PRDP ushers the initiation towards the success of the said cooperatives’ businesses.

According to the interviewed beneficiaries, they will receive the complete allotted help from PRDP within 2018.