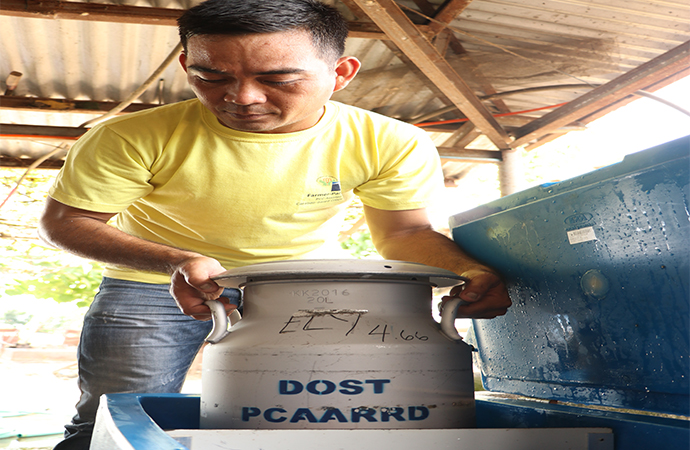 Eli Mislang is delighted with the quality of his harvested milk since he started using stainless milk can.

Eliseo “Eli” Mislang of Eastern Primary Multipurpose Cooperative in San Jose City, Nueva Ecija regretted those days when 14 liters from his total milk harvest were rejected by their cooperative which buys his milk. Main reason for the rejection: poor quality of milk he brought in.

Those rejections meant only one thing for him and his family: Low income.

Their cooperative buys the milk at Php60 per liter. Translated to peso value, what he lost due to those rejections was Php800 per day, a good income supposedly for him.

“I realized then that I made mistakes. It was not enough that I only follow good milking practices. I should also use appropriate milk utensils or containers and make sure that the milk harvest will be well protected during delivery,” Eli said.

Examining his ways of doing things for his milk harvest, he determined that the primary reasons for his milk spoilage and eventual rejections were the unhygienic milk handling practices he followed, the use of plastic milk containers, and the lack of milk cooling system.

Eli is practicing twice-a-day milking thus he needs to immediately deliver his collected milk to their cooperative in the afternoon to avoid spoilage.

“I tried my best to deliver my milk harvest before our co-op closes. As much as possible, I didn’t want to store the milk placed in plastic containers inside our freezer,” Eli said.

Eli considered it a blessing when he became one of the beneficiaries of the project titled “Milk Quality and Safety Assurance from Farm to Milk Processing Plant”. It was spearheaded by Mina Abella, PCC’s supervising science research specialist.

The three-year project is one of the components of the program “Enhancing Milk Production of Water Buffaloes through S&T Interventions” of PCC and the Philippine Council for Agriculture, Aquatic and Natural Resources Research and Development (PCAARRD), which provided funding of the project.

According to Abella, the project is in line with the program’s goal of increasing the milk production of buffaloes in Nueva Ecija and San Agustin and assuring its quality and safety within the program implementation.

“Poor quality of milk has been one of the perennial problems of our dairy farmers for many years. We should not only teach them how to increase the milk production of their buffaloes but also share with them the technologies on how to maintain and improve the milk quality from the farm, to the milk processing plant, and finally to the consumers,” she explained.

She added that the absence of cooling or break in the cold chain allows microorganisms to grow and quickly multiply, eventually reaching levels unsafe for consumption.  The resulting decrease in milk quality and safety and supply negatively impacts on the processors and consumers along the dairy value chain.

The project is also in preparation for the Dairy Safety Regulations under the Food Safety Act of 2013 wherein the responsibilities and roles of key players in the supply chain to ensure the quality and safety of milk are indicated.

Specifically, the project is aimed at reducing milk spoilage and rejection through improving the hygienic milk handling practices of farmers and quality of milk for safe consumption.

The project has three main activities: assessment of existing milking and milk handling practices and farm level milk quality; provision of interventions such as trainings, coaching and mentoring, support facilities and milk testing kits for improved milk quality; and monitoring and evaluation.

According to Abella, adoption of the recommended hygienic milking and milk handling practices from the milk production to milk collection and transport until the milk is received at the milk processing plant are essential for improved milk quality and safety assurance.

“For the cooperatives to implement regular quality control of milk, we also provided milk testing kit which they can use for simple platform tests such as organoleptic test, alcohol test and lactometer test,” she said.

Although the project is still ongoing, the research team has already documented significant changes particularly in the conformance of farmers to adopt hygienic milking and milk handling practices and proper sanitation of milking utensils.

Data from the PCC Central Dairy Collecting and Processing Facility (CDCPF) revealed that rejection of milk delivered by dairy cooperatives to CDPCF decreased from 7.94% in 2016 to 1.07% last May.

For Eli, due to his dedication and willingness to adopt the recommended hygienic milking and milk handling practices, he was thankful that he received support facilities from the project. The facilities included a 20-L stainless milk can, stainless milk pail, and insulated box.

“When I started using the stainless milk can for my harvested milk, I observed that the milk I deliver to our processing plant is now always able to meet the quality standards,” Eli happily attested.

He added that the project also taught him an alternative method of cooling the milk harvest. He uses salt-ice mixture in an insulated box in which he places his milk harvest. It is beneficial for dairy farmers like him, he said, who practices the afternoon milking but do not have the facilities to cool the milk.

“Because of this technique, even if I deliver the milk I harvested in the afternoon the next day, it passes the quality control. It is cost-effective since I don’t have to use electricity to cool the milk,” he said.

Currently, Eli has 23 buffaloes, 10 of which are confirmed pregnant and are expected to give birth within the year.

He collects 25 liters of milk a day from his buffaloes, which he then delivers to their cooperative.

“Now, I am able to generate and enjoy my income from the milk sales completely without rejection. I am very grateful to this helpful project of PCC and PCAARRD to improve the quality of milk I collected and assure its safety for public consumption,” Eli delightedly said.