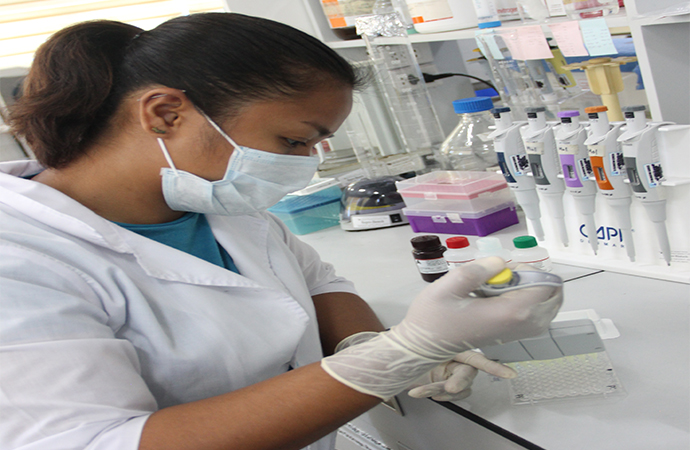 A common challenge faced by dairy farmers is to have their dairy buffaloes pregnant and, after calving, to see them get pregnant again in the shortest time possible. This is because they have no income if their animals are not lactating, which only happens if the animals give birth.

To address this concern, a project of PCC and Philippine Council for Agriculture, Aquatic and Natural Resources Research and Development (PCAARRD) titled “Development of Reproductive Management Program for Increased Efficiency of Artificial Insemination (AI) in Dairy Buffaloes” was launched.

“The project aims to not only increase efficiency in breeding dairy buffaloes but to shorten their calving interval to improve productivity using the Triple E strategy,” said Dr. Edwin Atabay who spearheads the project. Joining him in the project are Dr. Eufrocina Atabay, Dr. Jessica Gay Ortiz, Jhon Paul Apolinario, and Erwin Encarnacion.

The project is anchored on increasing the pregnancy rate among dairy buffaloes using a more effective AI. It also delves on early detection of pregnancy and in increasing the income from dairying by shortening the calving interval.

According to Dr. Edwin Atabay, AI efficiency went up to 35-40% from 20-25% during the conduct of the project. It is being carried out in Nueva Ecija, the designated “National Impact Zone for Buffalo Dairying” and San Agustin, Isabela.

Dairy buffaloes with body condition scores of 3-4 and have ovary size of about 2 cm containing dominant follicle with more than 7mm diameter were selected for the project.

“Unlike in the past, in which I had to wait for two to three years before my dairy buffaloes become pregnant again, now at least one became pregnant in a relatively shorter time and this ensures me of milk production,” Eddie Allado, a dairy farmer from San Agustin, Isabela, said.

He is among the buffalo raisers who were selected to be part of the project.

According to him, in his almost one decade as a dairy farmer, the propagation of his buffaloes from four to sixteen was all through AI and now through Fixed Time AI (FTAI).

“Since the start of the on-site conduct of the project, the number of farmers of San Agustin that choose FTAI gradually increased because they saw that it is effective,” Dr. Atabay said.

“Because my dairy buffaloes propagated, milk production increased and my income in dairy went up,” Allado said. In three dairy buffaloes, he collects 12-13 liters and earns more than Php100,000 in eight months.

Apart from providing the needs of his family, he was also able to slowly improve his house and had bought two motorcycles from the daily income he gets from dairying.

According to Dr. Jessica Gay Ortiz, one of Project 2 team members, the estrous cycle of a dairy buffalo was studied thoroughly to determine and optimize the methods that will be used in breeding as well as in pregnancy detection. The methods were used at the PCC’s Gene Pool before being conducted in their target sites.

“We need to increase the conception rate to utilize the maximum potential of the dairy buffaloes,” Dr. Edwin Atabay said.

To determine pregnancy in the fastest time possible, ultrasonography or ultrasound and protein-associated glycoprotein (PAG) assay were used.

In using the said technologies, the calving interval, which can reach about two years or even more may be reduced by up to six months. Hence, the potential income of the farmer can be nearly Php45,000.

“In ultrasound, it is possible to detect pregnancy within 30 days and in PAG assay, after 28 days compared to rectal palpation, which is usually done within two to three months,” Dr. Ortiz said.

According to Dr. Ortiz, the dairy buffaloes need to be pregnant in the earliest time possible after parturition to avoid losing income since, during this time, the farmer spends money on the needs of the dairy buffaloes and no returns are gained. She added that it is also better to use ultrasound because “early embryonic death” can be determined.

This circumstance, she said, happens when the dairy buffalo experienced abortion. The farmer cannot notice this because there are no signs shown physically. Thus, the farmer once again experiences loss of income.

“Ultrasonography has added benefits such as fetal sexing and the ability to characterize the uterus, fetus, and the ovary,” Dr. Atabay added.

Though nearing the end of the project, the initiatives of the team members are continuously being intensified to meet the project’s objectives.