Cooperation, use of technologies usher improvement of dairy livelihood in N.E. 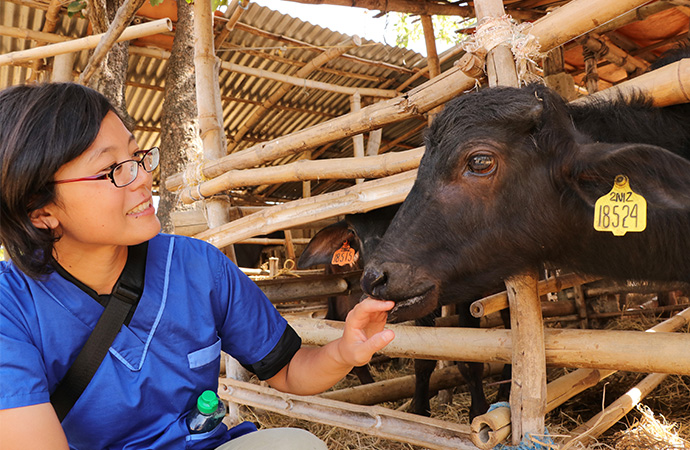 By 2020, Dr. Kunisawa hopes to have at least 80% of the farmers she assisted to be adopting the technologies from PCC and that they are using them to improve further their means of livelihood.

Using her bicycle, she pedals her way from the PCC National Headquarters and Gene Pool to reach the barangays of Licaong and Catalanacan in Muñoz, Nueva Ecija where she is assigned. She conducts different initiatives that are anchored on PCC’s “Dairy Herd Improvement” (DHI) program that aims in bringing some more improvements in dairying in the province, which is designated as the “National Impact Zone” (NIZ).

The DHI addresses the overall provision of social and technical services of PCC to dairy farmers. Some of these are facilitation of trainings on proper animal management, entrustment of carabaos, organization of cooperatives, and other assistance that can help dairy farmers.

The results of this particular program are set to be replicated among the PCC’s regional centers in the country.

For 24 months, she will be one among those working on DHI at the NIZ.  She started working at PCC in July 2018 and expects to complete her stint in July 2020.

“What is good about this undertaking is that we can focus on two PCC-assisted cooperatives in Licaong and Catalanacan. It will allow us to see and identify problems in the herd of the farmers. The findings will be shared to other cooperatives in Nueva Ecija,” Wilma del Rosario, head of PCC-NIZ coordinating unit said.

At present, 42 farmers are being assisted by Dr. Kunisawa. She helps in tending 200 carabaos.

Dr. Kunisawa has three primary objectives in her activity plan on DHI. First is to determine the technologies utilized by the farmers, second, to ensure that the farmers apply technologies from PCC by educating them, and third is to measure the effect of using PCC technologies.

On the side, Dr. Kunisawa also delves on breeding, centered on shortening the calving interval and on pregnancy detection. To determine the dilemmas of the farmer on these issues, she patiently interviews them.

“Based on the initial data she gathered, it was found that the common problem of farmers was the recording of their observation when it comes to breeding,” Mario Delizo of PCC-NIZ coordinating team said.

To make the recording better, Dr. Kunisawa decided to share her knowledge in using an improved version of breeding calendar, which is a technology from Japan.

The calendar is a monitoring and recording tool. It shows when the farmer can determine pregnancy of the dairy buffalo and if pregnant, the possible day of giving birth.

“Breeding is one of the hardest things to conduct because apart from the farmers being in different places, we usually rely on the farmer’s observations. Hence, the breeding calendar recommended by Dr. Kunisawa can be of good help,” Delizo said.

Dr. Kunisawa added that with the use of the calendar, the calving interval would be shortened because the farmer is aware of the critical days that need to be considered in breeding.

“If the calving interval was shortened, more calves will be born within the productive life span of a dairy buffalo, which the farmer can benefit from. The milk production will increase and the income of the farmer will also increase,” del Rosario said.

Towards a more intensified initiative on DHI

According to Delizo, apart from Dr. Kunisawa, they also work hand-in-hand with different PCC groups that are in-charge of the projects of PCC and Philippine Council for Agriculture, Aquatic and Natural Resources Research and Development that are being conducted at the NIZ.

“At present, we assist 50 cooperatives in the NIZ,” del Rosario said.

On the other hand, Delizo stated that apart from providing support to the needs of the purebred buffaloes, the PCC-NIZ coordinating unit has started giving assistance to crossbred buffalo owners in the province.