High yield, income with the use of new technology 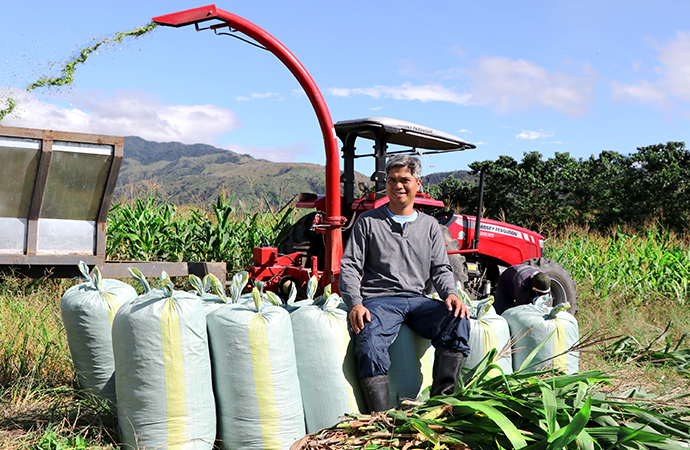 Isagani Cajucom is the epitome of a successful farmer-entrepreneur or carapreneur with higher income and abundant harvest through silage production technology. Despite discouragements, he took the risk to commercialize corn silage. This technology, coupled with hard work and perseverance, paved way for Isagani to relish on his gains from this viable enterprise. Photo by Rowena Bumanlag

Isagani Cajucom’s life went through a major shift after he started his business on grass and corn silage production and commercialization in Lupao, Nueva Ecija.

From being an “employee” as a “chemist” at Clark Pampanga, he is now the “boss” of his own business venture. In fact, he now has 27 regular farm workers aside from on-call laborers who harvest his grass and corn.

Apart from that, he was able to acquire some assets through his business, e.g., two tractors, one forage chopper, 12 generator sets, second hand truck, car; and land, which he either purchased completely or mortgaged from other farmers.

He also has other business in livestock and poultry production, which include 15-17 hogs for fattening, seven buffaloes for dairying, which he received from the Philippine Carabao Center (PCC), and 200 native chickens for meat.

According to Isagani, it was in May 2013 when he started his corn silage business. This, he said, was after the PCC was able to convince him to try out and adopt its technology on silage production.

Under the “Commercialization of Grass/Forage Corn Silage for Dairy Buffaloes in Lupao, Nueva Ecija” project of the PCC and Philippine Council for Agriculture, Aquatic, and Natural Resources Research and Development (PCAARRD), Isagani was designated as the “farm leader” or “product champion” of the said project along with 10 farmer associates.

Isagani along with his co-farmers underwent a series of learning  events, as facilitated by PCC and PCAARRD, e.g., proper forage corn production and actual process of making silage, where they were trained on the how-to’s of chopping grass using forage chopper, putting the chopped grass inside the plastic or “silo bags”, and fermenting it afterwards before product commercialization. After these trainings were finished, they started planting corn in May 2013.

The recommended age of the corn before it could be harvested after planting is 75-80 days, according to the experts of the PCC. Thus, it was after this time when Isagani and his co-farmers started harvesting their corn and processed it as corn silage.

During the first cycle of their silage production, PCC purchased their grass and corn silage at the price of Php3 per kg or Php105 to Php120 per sack, according to Isagani. During this time, too, Isagani earned Php33,000 from his produced silage while he earned Php28,000 during the second cycle.

By this time, Isagani said that he was only using one hectare of land for his silage business. He shared that his one-hectare land gave him at least 23,000 kg to 38,000 kg of corn or grass harvest per cycle.

At present, Isagani earns an average of Php300,000 per cycle in his silage business. He harvests an average of 600,000 kg of corn per cycle from his 2.1-hectare of land; 10.92-hectare land mortgages; and outsourced silages from other farmers in Nueva Ecija.

Based on the recorded cost and return analysis of his business, it showed that his return on investment significantly increased to 12.88% this year compared to 3.65% last 2013.

When Isagani became the project’s product champion, PCC and PCAARRD provided all possible assistance for him to establish and expand his market.

Isagani said that even when the project already ended last 2016, his market for silage got bigger through his continuous promotion and “word-of-mouth” by his customers and buyers.

His common customers are the small-scale and large-scale farms that tend cows, carabaos, goats and even rabbits. These farms are located in the provinces of Batangas, Cavite, Bulacan, Pangasinan, Nueva Ecija, Isabela and Baguio.

According to Isagani, his transactions to these markets can be classified as “seasonal”, “continuous”, or “contractual” depending on the needs of his customers for silage. Ordinarily, he sells his silage at Php4 per kg (pick-up price) and Php4.5 per kg when delivered.

“When I was an employee before, I didn’t have any other choice but to work straight starting from 8AM to 5PM. My salary was also “fixed” and I was working far away from my family. But now, through silage production business, I now own my time, be with my family, and earn enough income for my family’s needs while helping other farmers in our province when it comes to job provisions and opportunities,” Isagani happily shared.