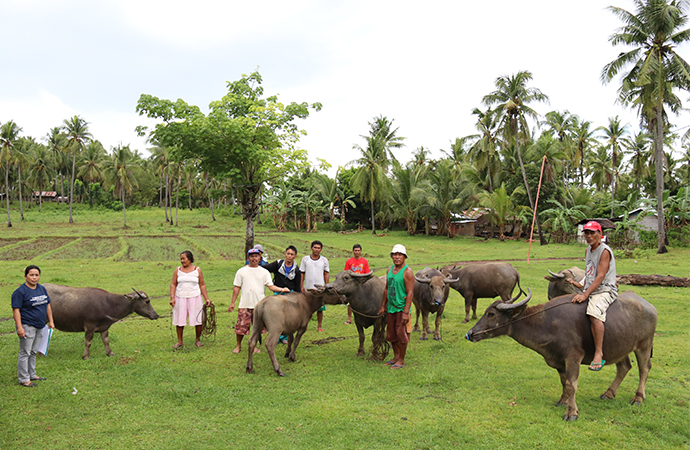 When CPG was chosen to be a carabao sanctuary in the Visayas, it was considered for two reasons: (1) in honor of late President Carlos P. Garcia and the topographical location; (2) presence of physical barrier making it ideal for protecting the conservation site in the island.

Over the past nine years, local farmers together with the Local Government Unit (LGU) officials established a sanctuary of native carabaos in the municipality of President Carlos P. Garcia Island (CPG) in the province of Bohol.

The signing of a memorandum of agreement (MOA) with PCC at Ubay Stock Farm (USF), spearheaded by then Center Director Dr. Caro Salces, gave the implementation of the conservation program a go-ahead.

CPG Mayor Fernando Estavilla explicitly declared that the signed agreement with PCC covers conservation, improvement, and utilization of the native carabao as a source of genetics for natural and artificial reproduction.

Extension services to animals such as deworming, administration of vitamins, and screening of blood samples for infectious disease complement the continuing technical support provided to the native carabao farmers in the island. The PCC@USF team headed by Pat Granada ensures that these services directly benefit farmers.

Researchers from the PCC national headquarters headed by Lilian Villamor together with Dr. Ester Flores, Therese Patricka Cailipan, Aivhie Jhoy Escuadro, and Alexander Paraguas benchmarked on establishing DNA profiles and body morphometrics from native carabaos in CPG in order to determine the current status of the population as pure native carabao breed.

Through molecular analysis, the DNA profiles of these animals revealed that native carabaos in CPG were kept as a pure-type swamp breed, with high bloodline or affinity to the swamp buffalo ancestry.  This simply reflects the commitment of the local farmers and support of LGUs to the conservation program which strictly prohibits the introduction of exotic buffalo breeds in the carabao sanctuary through a local ordinance.

Said activity was part of a three-year study on genetic diversity of the Philippine Carabao across the country with a financial grant from the Department of Agriculture Biotech Program with PCC as the implementing agency.

CPG was chosen as a carabao sanctuary in the Visayas for two reasons: to honor the late President Carlos P. Garcia and for its topographical location.  CPG features a physical barrier that protects the conservation site from the entry of exotic breeds of buffaloes.

Previously, the island was hardly accessible because it can only be reached through a 15-minute boat ride from the port of Ubay, Bohol. But with the operation of the LGU-run ferry “LCT Isla de Pitogo”, the island is ready to take in more development interventions.  From mainland Bohol, a regular ferry schedule is from 5:30 am to 8:00 pm daily.

In the advent of modernization in agriculture, native carabao conservation is facing both challenges and opportunities.

The high rate of animal extraction due to market demand poses a threat to the population of native carabaos.

“The pool of native carabao genes is in danger of extinction due to slaughtering. People no longer see the importance of carabao in agriculture due to the advent of farm machinery and other modern farm implements,” Estavilla said.

While the ease of transportation to and fro CPG has opened opportunities for the island, it could also mean entry of other animals into the island which may imperil the ongoing conservation efforts.

Against this conflict, PCC@USF officer-in-charge Dr. Glenn Bajenting, sees an opportunity that PCC and the LGU might resolve to agree on to address this. He proposes the crafting of a policy that would strengthen the implementation of the conservation program in CPG such as making it into an “official” carabao sanctuary.

Meanwhile, efforts toward improving the native carabao sanctuary while extending assistance to local farmers will continue.

“PCC can continue to assist carabao farmers in partnership with other sectors through the collaborative technical and logistical support to facilitate the development of a comprehensive development plan and other related activities for the livestock industry,” Estavilla said.

Looking forward, Estavilla envisions a bright future for CPG island as an agri-tourism site in Bohol.

“Five years from now, the town will be a breeding area for native carabao, and our carabao farmers will be self-sufficient entrepreneurs for native carabao by-products such as milk and meat. By then, we will be the haven of a ‘dairy type’ improved breed of native carabao. It will be our contribution to the agri-tourism of Bohol,” he said.