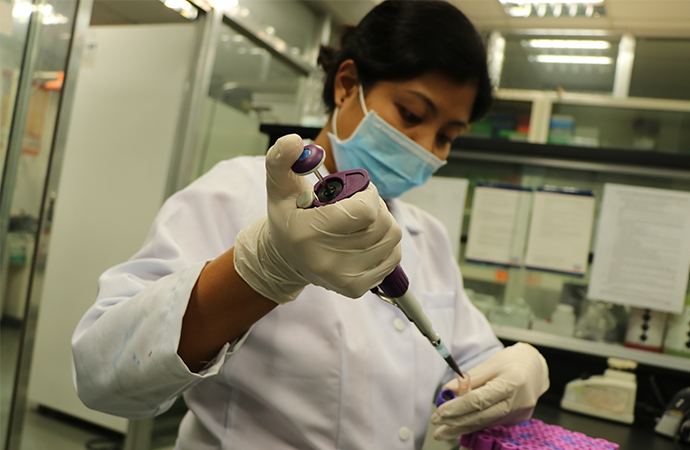 “We want to develop a kit or technology that can be used in both cattle and buffalo industries.” -Melinda Reyes Science Research Specialist II

The genetic merit of a buffalo can be accurately measured given that its parentage is correct. Misidentification of parents may result in inaccurate estimated breeding value of an animal.

A study titled “Microsatellite-Based Parentage Verification of Cattle and Buffalo Breeds in the Philippines” by Melinda Reyes, Noriel Esteban, and Dr. Ester Flores of the Philippine Carabao Center’s (PCC) Molecular Genetics Laboratory, Animal Breeding and Genomics Section, was conducted to “establish a set of microsatellite (MS) markers that can be used for routine parentage verification” on the said animals.

Reyes noted that the locally developed parentage verification kit can be used in both buffaloes and cattle to ascertain the correctness of reported parents.

The locally developed parentage kit consists of 15 MS markers to be use in a two-stage process. The first stage used the first 12 markers. If no inconsistency is observed in the result and if correct parentage is assigned in the process, there is no need to go to the second stage. The second stage utilizes the last 3 MS markers to ascertain parentage assignment. In this way, the test also becomes less expensive because the cost of testing increases as the number of MS marker increases.

“We tested known families and those otherwise to ensure that it works,” Dr. Ester Flores, head of Animal Breeding and Genomics Section, said.

According to Reyes, they hope that in the future they can commercialize the kit as something that can be used in both cattle and buffalo industries.  For now, there is a need to further explore its reliability by testing it outside of PCC.