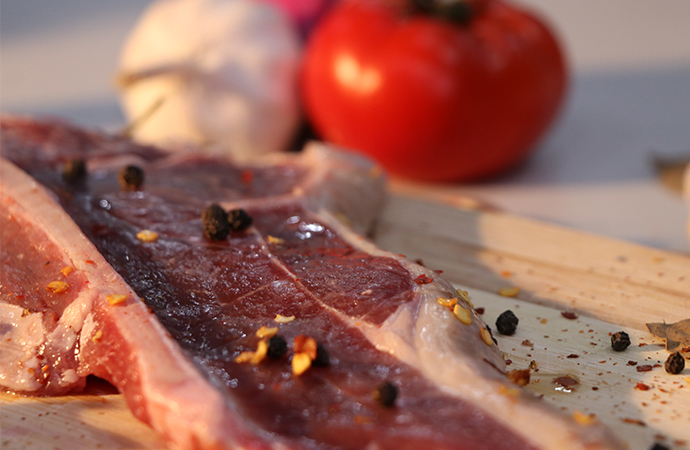 Meat is one of the marketable products that can be derived from carabaos. However, without good genes, the potential of carabaos for meat cannot be fully maximized.

Meat is one of the marketable products that can be derived from carabaos. However, without good genes, the potential of carabaos for meat cannot be fully maximized.

“We want to develop a breed of carabaos for meat to produce higher meat quality,” this is what Dr. Kristine Joy Prades said when asked on what she and her co-researchers envision in the future.

Dr. Prades is Philippine Carabao Center’s (PCC) senior science research specialist and one of the researchers spearheading two PCC researches that are anchored towards the production of carabao’s meat.

Its primary objective is to “establish an accurate measurement method for identifying economically important buffalo meat traits and to establish ultrasound information to determine the value and merit of the carcass while the animal is still alive.”

The use of real time ultrasound scanning (RTUS) allows evaluation and identification of breeder animals with superior meat quality at a young age of 12 months. This allows progeny testing for carcass traits in a shorter period of time as compared to its previously slow and expensive process.

Since age is crucial in the tenderness of meat, PCC’s use of RTUS in carabaos also avoids production of meat with poor quality that is sold for a low price.

“PCC ranks its bulls based on its breeding value on milk, those that fall behind are commonly intended for slaughter. We want to put them into better use and so we started our efforts in meat,” Dr. Prades said.

Dr. Prades noted that the parents’ genetics play a very significant role in the selection. Since carabaos carries 50/50 of the genes of their parents, having good genes meant that the potential of having quality meat is high.

While RTUS enables identification of carabaos that are ideal for meat, the coinciding research “Association of bovine genetic markers with marbling and tenderness in cattle and buffaloes” focuses on the improvement of meat through the establishment of genetic markers.

“A carabao’s meat can be considered as good quality based on its back fat, the size of its loin eye, marbling, and nutritional value,” Dr. Prades said.  Marbling refers to the white flecks of intramuscular fat in the meat.

According to her, compared to cattle meat (beef), carabao’s meat has less cholesterol, less calories, more protein, and more mineral.

Meanwhile, PCC researchers found that the Brazillan buffalo breed has a good potential for meat production because it has a big loin eye area.

Based on the predicted growth curve, the development of a carabao’s loin eye reaches a plateau at 27 months. Hence, before or until after two months upon reaching the said month, is a suitable time to do fattening.  In this way, the raiser can avoid incurring more expenditures in rearing a carabao for slaughter.

During the PCC’s 26th Anniversary Farmer’s Field Day, meat products such as carabao’s beef or “carabeef”, tapa and sausage were showcased. The products were subjected to tasting to gauge its marketability in terms of the acceptance of the stakeholders involved in the said event.

As per PCC’s research efforts in meat, an average of 48% yield or 240 kg. of meat can be obtained from a carabao with a live weight of 500 kg. However, there is a tendency to get more than 51% when the animal was fattened.

To further PCC’s initiatives on meat production, Dr. Prades stated that there is a need to also develop a specific feeding protocol for carabaos. This is in consideration of good nutrition and health, which is vital in the successful rearing of carabaos.

According to her, a market study may be conducted to assess potential supply and demand of carabao’s meat. Furthermore, they plan to utilize native buffaloes, crossbreeds, and other breed of carabaos that may lead to the emergence of a distinct type of breed for meat production.

“PCC ranks its bulls based on its breeding value, those that fall behind are commonly intended for slaughter. We want to put them into better use and so we started our efforts in meat”.-Dr. Kristine Joy Prades
Senior Science Research Specialist