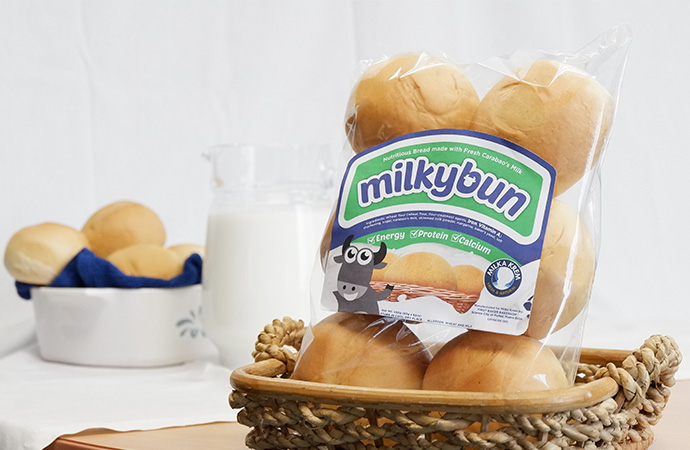 The Milkybun, one of the products developed by DA-PCC, represents the relentless effort of the agency in helping dairy farmers and the general public rise above the challenges brought about by the pandemic. It renders additional profit for the carapreneurs and helps boost immunity against COVID-19 as it equates to a glass of milk. (Photo by Jan Czarina Salas)

Despite the lack of sales channels for carabao’s milk due to the enhanced community quarantine following the outbreak of COVID-19, the Department of Agriculture-Philippine Carabao Center (DA-PCC) found a way to overturn the crisis.

The unsold milk produce from select farmers’ cooperatives was collected and developed by the Carabao Enterprise Development Section (CEDS) into nutrient-rich products labeled as Milkybun and Milk Pops under the brand name of Milka Krem.

“With the directive of our Executive Director Dr. Arnel Del Barrio, our objective was to develop milk-based products with long shelf life. We specifically made products that could be equated to a glass of carabao’s milk for our community feeding program,” Mina Abella, head of DA-PCC CEDS, said.

She added these products have so far gained loyal patrons who want to stay healthy during the emergency health crisis.

Both products were launched in San Jose City, Nueva Ecija during the celebration of the Farmers’ and Fisherfolks’ Month last May 28.

About 500 pieces of Milkybun and 200 ml toned carabao’s milk in sachets were distributed to children in Brgy. FE Marcos, San Jose City, to help improve their nutrition. Other beneficiaries of the community feeding were 60 abandoned children and elderly housed at the “Tahanan ng Damayang Kristiyano” also in San Jose City.

Following this initiative, 2,400 children in  the adjacent town of Science City of Muñoz each received Milkybun and 200ml toned carabao’s milk.

“While helping our farmers market their produce even amidst the pandemic, we are also glad to be an instrument of boosting the immunity of our consumers against the virus,” Abella added.

The community feeding programs were conducted in partnership with the recipient towns’ local government units.

The making of milky treats

By the end of March, the DA-PCC CEDS came up with the Milk Pops, which are sweet, soft, and chewy flavored pastillas balls. A pack of this candy-like treat contains 10 pieces of 4-gram balls. It has six flavors: melon, honeydew, strawberry, chocolate, mango, and blueberry.

In the same period, the CEDS released the Milkybun, an improved version of nutri-bun. At the onset of developing the bun, the initial concept was simply to come up with a “pandesal” with carabao’s milk.

Abella said the Milkybun is a unique product on its own because it is enriched with carabao’s milk. The DA-PCC tapped a local bakery to mass produce the bun for the feeding program and for commercialization.

According to DA-PCC Food Technologist Teresita Baltazar, Milkybun is rich with 250 calories apiece while Milk Pops has 170 calories.

Calorie content is a source of energy needed to sustain bodily functions. Aside from this nutrition, carabao’s milk is also rich in magnesium, potassium, calcium, and phosphorus.

The Milkybun is now available at the Milka Krem store in the Science City of Muñoz at Php10 per piece or Php60 per pack of six. The Milkybun can also be purchased from the DA-PCC’s Kadiwa Buffalo Milk on Wheels, rolling out in Nueva Ecija.

“With the ongoing COVID-19 crisis, the Milkybun is an alternative to hot meals of the Department of Social Welfare and Development and Department of Education for community feeding,” Abella said.

She said DA-PCC plans to cascade the technology to its assisted farmers’ cooperatives. This way, she said, farmers will be able to generate more income especially when the products become staple in government-led community feedings.