Del Barrio is ‘Doctor to the Barrios’ 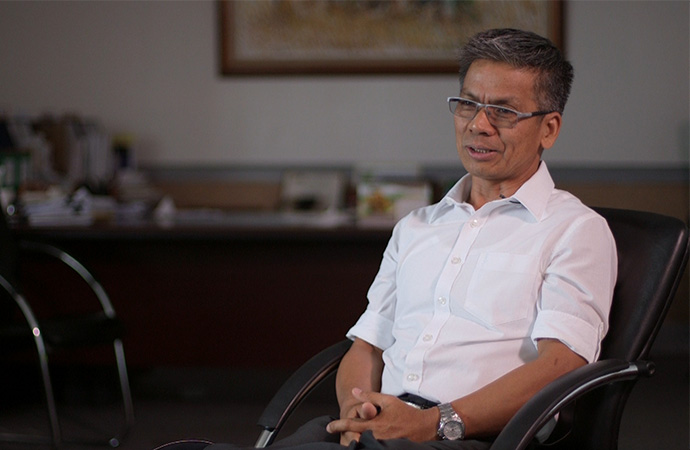 “In my years of service, I was able to carry out my duties well as the agency’s head because of DA-PCC’s culture where everyone works hand-in-hand despite differences. Surely there is harmony in diversity as depicted by how well we work together towards a common goal of helping our farmers. I hope the agency continues to nurture such practice.” -Dr. Arnel Del Barrio

“In my years of service, I was able to carry out my duties well as the agency’s head because of DA-PCC’s culture where everyone works hand-in-hand despite differences. Surely there is harmony in diversity as depicted by how well we work together towards a common goal of helping our farmers. I hope the agency continues to nurture such practice.”

This was how Dr. Arnel Del Barrio described his aspiration and stint as DA-PCC’s Executive Director from June 2014 until his official retirement on November 1.

During a recognition program held in his honor on October 28 (three days after his 60th birthday) at the DA-PCC national headquarters and gene pool in the Science City of Muñoz, Nueva Ecija, Dr. Del Barrio wore his heart on his sleeve as he delivered his speech.

He underscored the need to focus on the DA-PCC’s deliverables especially its programs, projects, activities, and partnerships, which will contribute to increased production and income of carapreneurs.

“Our loyalty is to the agency, not to the person leading it. Our allegiance is to the DA-PCC’s goal. Let’s continue the program and add more,” he averred.

Aside from personal messages delivered by Dr. Del Barrio’s colleagues, the event also featured a series of video presentations, which included a chronicle of his contributions to the carabao sector, spiels and greetings from the DA-PCC’s regional center directors and staff members.

An animal nutritionist, Dr. Del Barrio rose to the ranks of Researcher, Supervising Science Research Specialist, Center Director of DA-PCC at University of the Philippines Los Baños (DA-PCC at UPLB), Scientist I, Acting Executive Director, and Executive Director III. Recently, he was also elected as Academician by the National Academy of Science and Technology.

Dr. Del Barrio’s staunch advocacy efforts in progressing not only the carabao but also the dairy industry paved the way to monumental projects such as the Carabao-Based Business Improvement Network and Coconut-Carabao Development Project (CCDP). During his tenure as DA-PCC’s Executive Director, he also initiated and crafted the National Carabao Conference, an annual event where carabao keepers and other industry players gather and exchange technologies, ideas, and best practices.

Looking back to his service at DA-PCC, it was under his leadership that the agency was given the “2018 Outstanding Institution Award” under Cluster IV (Divisions of Biological Sciences, Agriculture and Forestry and Veterinary Medicine) by the National Research Council of the Philippines and the “Bronze Award of PRIME-HRM” for having managed and implemented the processes under the four core HRM Systems. DA-PCC also ranked 3rd among DA’s attached agencies for FY 2018 fund utilization and was certified by TUV SUD Asia Pacific for its compliance with the integrated systems of quality management (ISO 9001:2015), environmental management (ISO 14001:2015) and occupational health and safety (OHSAS 18001:2007).

In 2019, DA-PCC was recognized by the Department of Trade and Industry as its “Most Outstanding Partner Agency”. Apart from this, it forged a number of meaningful partnerships and collaborations with both national and international institutions for the sustainable growth of the livestock particularly the carabao industry.

In the face of the current global health crisis, DA-PCC, under the headship of Dr. Del Barrio, also collaborated with various government and private institutions to help carapreneurs cope with the unprecedented challenges brought about by the COVID-19 pandemic. These include partnerships with the Department of Agrarian Reform for the establishment of Milkybun processing facility; Department of Education and Department of Social Welfare and Development for the implementation of milk feeding program; DA-Philippine Coconut Authority for the CCDP; AgriCOOPh Federation for the promotion of the project titled “Establishment of the Nueva Ecija Sustainable Dairy Hub”; and Agriterra Philippines and National Dairy Authority for the conduct of the project “Improving the Dairy Value Chain in the Visayas Region thru GROW COOP”. Moreover, it partnered with San Miguel Corporation and San Miguel Foundation Inc. for other interventions in support of dairy farmers.

Awarded as Outstanding Young Scientist in 2000, conferred as Scientist I in 2014 by the NAST, and recognized by the Philippine Society of Animal Science (PSAS) as “Distinguished Fellow” in 2017, Dr. del Barrio’s name is, no doubt, a constant inclusion in the roster of promising researchers especially in the field of ruminant nutrition.

He was actively engaged in research studies such as (1) Enhancing Milk Production of Water Buffaloes through S&T Interventions with 5 project components (2) Nutritive Value, Digestibility and Performance of Buffaloes using Banana by-products and waterlily as alternative feed resources (3) Development of Sustainable Rice Straw Management Practices and Technologies for Ruminant Fodder in the Philippines.

Dr. Del Barrio’s nearly four decades of exemplary work in scientific research and development has transcended various disciplines in animal science such as animal nutrition and feed management systems, rumen microbiology, reproductive biotechnology, meat science, and wildlife biology and conservation. His effective leadership has also been widely esteemed by other professional organizations having served as president of PSAS in 2007 to 2008, Philippine Society of Animal Nutritionists in 2003 to 2005 and the Associations of Professionals in Livestock Production in 2000 to 2001 and as chair of the Asian Australasian Association of Animal Production Societies.

In his concluding statement, Dr. Del Barrio said: “Young leaders will replace us hence continuous capability building is crucial. Nevertheless, we, retirees, can still convene and contribute to the DA-PCC as an advocacy group by giving opinions and ideas where we can help.”

Dr. Del Barrio may have bidden farewell and set towards a new phase of his life, however it can’t be denied that he is a revered man of excellence who has dedicated his service for Filipino farmers, as his life’s mantra goes: “Sa diwa at puso, I am one with farmers”.