At heart and at work, foreigners no more: The Fujiharas’ decade of volunteer work in PH 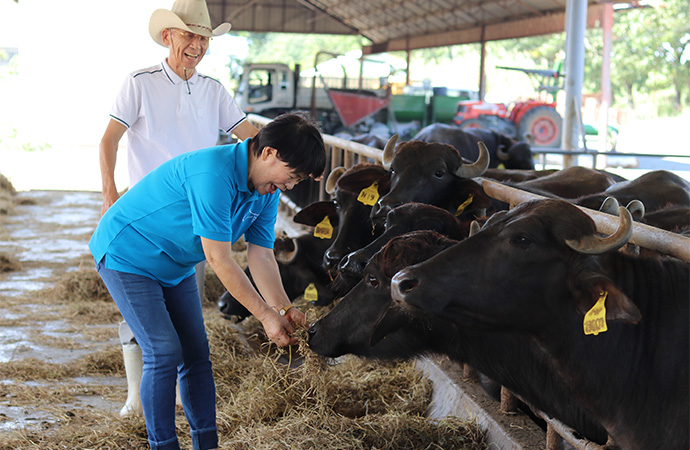 All smiles as the Fujiharas spend their time feeding the carabaos at the DA-PCC Gene Pool. What started as a volunteer work has turned into a calling and led them to what they deem as a passion with a purpose. More than ever, they are now one in spirit and heart with the Filipino people. (Photo by Charlene Joanino)

Far away from home, Dr. Tsutomo Fujihara, an animal nutrition scientist and consultant, has been engaged with the Department of Agriculture-Philippine Carabao Center (DA-PCC) for the past 10 years. It was his volition to help local farmers the moment he set foot on Philippine soil.

When asked why he chose to render volunteer work in a tropical country, which differs significantly to his home country in many respects including climate and culture, Dr. Fujihara enthusiastically shared that his passion for the carabao, an iconic agricultural asset in the Philippines, has drawn him to this country.

“Although I find the country extremely hot and humid in most months, this does not hinder me from enjoying the countryside where farmers would receive my frequent visits with exceptional warmth,” he said.

In the past, he had visited different places in Asia and East Africa that allowed him to conduct over 175 ruminant nutrition researches.

In 1986, he first came to the Philippines for a goat-related project. Later on, he collaborated with the DA-PCC and was invited by Dr. Libertado Cruz, forerunner and former DA-PCC executive director, to join the agency. From then on, he would regularly fly in and out of the country.

By 2011, he and his wife Kazumi (a retired teacher) were invited by the DA-PCC to reside inside the agency’s staff housing facility at its national headquarters in Nueva Ecija. They only go back home in Japan once every year to see their two children who are already working professionals.

“If I were to compare the local buffalo industry then and now, I’d say that the DA-PCC’s programs and services have gone headways in terms of the agency’s contribution in improving the sector,” he said.

As a retired professor of Shimane University in Matsue, Japan, he deems the DA-PCC as a venue to share his expertise with other specialists and workers in the field of animal nutrition and consequently help improve the livelihood of carabao farmers.

Dr. Fujihara is known for his active engagement in the commercialization of silage production initially in Nueva Ecija. Silage is produced from the anaerobic fermentation of forage or corn, allowing the preservation of said feedstuff for buffaloes.

Silage is often used as a buffer feedstuff during the dry season when fresh green grasses become scarce. Farmers, such as Isagani Cajucom of Lupao, Nueva Ecija, also earn from silage production selling a 40-kg sack of corn silage at Php160-Php180.

Aside from Dr. Fujihara’s volunteer work in DA-PCC, he and his wife are also benefactors to locals who are in need of livelihood. Shelling out money from their own pockets, the couple distributed start-up goat stocks to select families and guided them throughout all stages in goat raising and meat production.

“We are not expecting to get anything in return for doing this. We just sincerely want to help however we can,” Dr. Fujihara shared.

The couple were able to give more than 200 goats to locals that are often referred to them by their Filipino friends. They would also do random acts of kindness such as buying just about anything from a Filipino vendor who passes them by.

“We have already acclimatized our way of life here in the Philippines. We can even understand Tagalog and can speak common greetings and courtesies such as “salamat,” he shared.

Another indication that the Fujiharas are now, to some extent, Filipinized is that they are now avid drinkers of carabao’s milk.

More than that, the couple has now imbibed a heart that beats for the Filipinos. Both are quick to agree that the Philippines is now their second home and at home they will be for years to come.