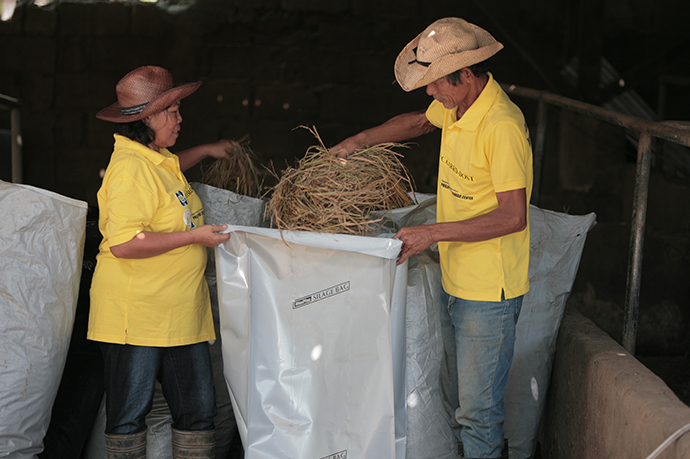 When fed with urea-treated rice straw (UTRS), the carabao yields more milk thereby providing more income benefit to the farmers by as much as 33 percent.

The UTRS consists of a combination of molasses, urea, rice straw and water.

The findings were based on the study titled, “Community-Based S & T Farm Project on the Preparation and Utilization of UTRS as Fodder for Dairy Buffaloes”, conducted by a research team from the Philippine Carabao Center (PCC).

The study was conducted to find out the efficacy of the UTRS and if found positive to promote it  for adaption and possible mass production by a cooperative-led producer in the town of Llanera in Nueva Ecija.

The town produces approximately 4.5 million tons of rice straw every year. Likewise, it has three dairy buffalo cooperatives being assisted by the PCC, which are the Kapitbahayan sa A. Mabini Producers Cooperative (KAMPC), Punla Multipurpose Cooperative (PMC) and Casile Dairy Producers ’Cooperative (CDPC).

These coops have 93 members tending some 144 dairy buffaloes, The farmer-members separately cultivate 102 hectares of rice land that at harvest time provide abundant rice straws. (KAMPC has 25 members who have 50 buffaloes and 25 ha. land; PMC with 24 members tending 27 ha area of land and 30 buffaloes, and CDPC with 44 members, 50 ha and 64 buffaloes).

Twenty-seven dairy buffaloes were used in the feeding trials, 19 of which were fed with UTRS while the remaining eight buffaloes were fed with pure rice straw only. Each cow was also given  two kilograms of supplementary concentrates and the milk production and income derived from feeding UTRS to the animals were monitored for 210 days.

Thirty farmer-partners from the three cooperatives were trained on how to prepare UTRS. They were taught how to chop the rice straws, prepare the urea (molasses solution), treat and stack UTRS, and determine the nutritive value of untreated rice straw compared to the UTRS.

After three years of project implementation, results of the study showed that KAMPC produced 317 tons of UTRS, CDPC, 76.3 tons; and PMC, 40 tons. The rice straw materials used in the preparation of UTRS were sprayed or dipped in 2% urea-and 5% molasses solution, conserved to ferment for at least 3 weeks prior to harvest, packed in silage bags with one ton per bag sealed, and placed in bunker silo.

The effect of UTRS on the daily milk production of buffaloes given with UTRS was 4.4kg per day while the buffaloes fed only with pure rice straw was 3.7 kg per day.

This showed that more income was attained from the buffaloes fed with UTRS.

The researchers concluded that UTRS can increase buffaloes’ milk production and farmers’ income.

They also concluded that the preparation and utilization of  the UTRS technology can:

• help solve the deficiency in fodder supply for feeding buffaloes especially in summer seasons where there is a limited source of fodder or feedstuff for dairy buffaloes;

•can be produced either in small scale or commercial scale production without much input in terms of capital and equipment; and

•serve as cheap fodder and a practical ingredient of a dairy buffalo ration.

The researchers highly recommended the UTRS for ruminant feeding and for its mass production for commercialization.