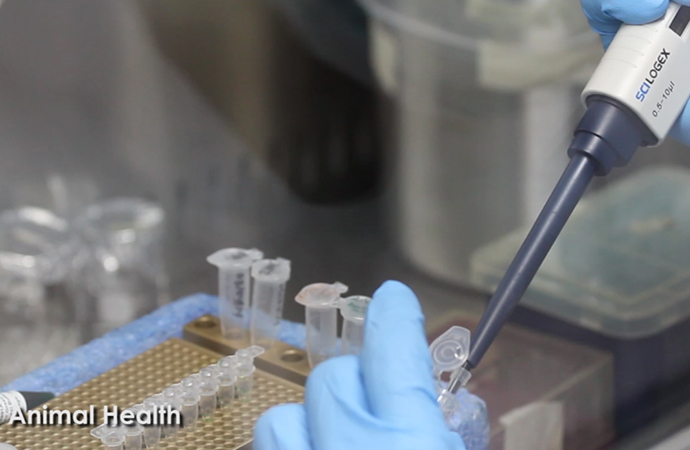 The polymerase chain reaction (PCR) is a technology in molecular biology used to amplify a single copy or a few copies of a piece of DNA across several orders of magnitude, generating thousands to millions of copies of a particular DNA sequence.

There are claims by several sectors that swamp-type water buffaloes are more resistant to infectious disease compared to riverine water buffaloes. To confirm this, the Philippine Carabao Center (PCC), through its Animal Health Unit, has conducted a preliminary study on the “Molecular Characterization of T-cell immunoglobulin mucin domain-3 (TIM-3), Galectin-9 (GAL-9), and NRAMP1/2 (Slc11a1/a2) genes of these two types of water buffaloes”.

Initial results of study indicated that there are unique changes in the amino acids of TIM-3, GAL-9, and NRAMP1/2 genes that can be associated with disease resistance tolerance and/or susceptibility in water buffaloes.

The importance of water buffalo to the lives of Filipino farmers is emphasized in the study as it is becoming a major source of milk that helps farmers increase their income and improve their over-all well-being. However, chronic occurrence of diseases is a major constraint in a dynamic and progressive livestock production and even in the meat-and-milk consuming human population.

Nevertheless, thru the introduction of genomic technologies and methods, the necessary tools are now available to begin identifying the genes that contribute to disease resistance, tolerance and/or susceptibility of the animal. The genes identified by these genomic studies provide valuable insight into disease biology and represent the initial steps toward the efficient therapeutic strategies that can substantially improve the animal’s health.

According to the study, TIM-3 is a type-l glycoprotein which is persistently expressed on dysfunctional T-cells during chronic infection. It is typically found on dendritic cells (DC), natural killer cells, CD4+Th1 cells, monocytes, and cytotoxic T-lymphocytes (CTL). It is characterized as an immune response negative regulator. Meanwhile, GAL-9 is a versatile immune-modulator involved in a wide range of biologic activities, such as cell adhesion and migration, proliferation and apoptosis, interaction of host cells with microbial pathogens, regulatory T-cell (Treg) differentiation and function, DC maturation, and antimicrobial immunity.

Whereas, solute-linked carrier 11a and 11a2 (Slc), also referred as Natural Resistance Associated Macrophage Protein 1/2, (Nramp1/Nramp2), have been associated to disease resistance and/or susceptibility across animal species. These genes have an important mechanism in the regulation against intracellular infection.

“Most of the farmers and even technical experts claim that native carabaos are disease-resistant or tolerant. This serves as one of our basis in conducting our study,”  Ryan Bismark Padiernos, lead researcher of the study, said.

He added that previous studies proved that other animals are disease-resistant but as for buffaloes, none so far had been done.

“We want to know the immunological basis of determining disease-resistant, tolerant and/or susceptible buffalo. The first step we did was to describe the genetic characteristic of four genes (TIM-3, GAL-9, and NRAMP-1/2) in the immune system of the swamp and riverine water buffaloes,” he said.

The study also compared these four genes with other mammalian species and determined the unique characteristic specific in water buffalo to provide baseline information prior to the assessment of disease progression in buffalo species.

Technically, materials and methods used in the study of these genes from swamp water buffaloes and riverine water buffaloes were Peripheral Blood Mononuclear Cell (PBMC) Isolation and Cultivation, Extraction of RNA and RT-PCR, Cloning, Sequencing and Homology and Phylogenetic analysis.

Sequence homology assessment and phylogenetic analyses were done to elaborate the distinctness of each species and to initiate research on the immunological basis behind the claim that swamp type buffalo could be more disease-resistant than its riverine counterpart.

“From the cDNA, we translated it into amino acid. We compared the genes of swamp and riverine buffaloes with those of other mammalian species,” Padiernos explained.

Though this study showed that both types of buffaloes including other breeds had high homology, he said, they found out that there are amino acid changes between swamp- and riverine buffalo’s TIM-3, GAL-9 and NRAMP1/2 genes. This finding provides an insight that the claim that swamp-type water buffalo could be more resistant or tolerant to infectious disease compared to riverine-type water buffalo might be true.

But, he hastened to add, it remains undetermined whether these changes in their genetic material are functionally important. “Thus, further investigation and thorough examination of the other contributing factors to elucidate the differences concerning immunological reactions and providing solution to why a particular animal species is more disease-resistant, tolerant and/or susceptible than its closest relative,” he said.

“Results of the study showed that the amino acid changes in both types of water buffalo could associate with disease resistance, tolerance and/or susceptibility. If so, this could be a potential gene marker that may be useful in future breeding program for the genetic selection of animals resistant to a particular infection” Padiernos said.

He added that based on the DNA sequence, a gene-based therapeutic protein can be developed to neutralize a specific infection. Through this study, one can establish a system for selective breeding of those buffaloes that are disease-resistant.

But to know if the animal is disease-resistant, its genetic characteristics must be studied and described.

“That’s exactly what we did,” Padiernos said.

The team is now set to conduct further studies in assessing the role of these genes in disease progression in water buffalo.