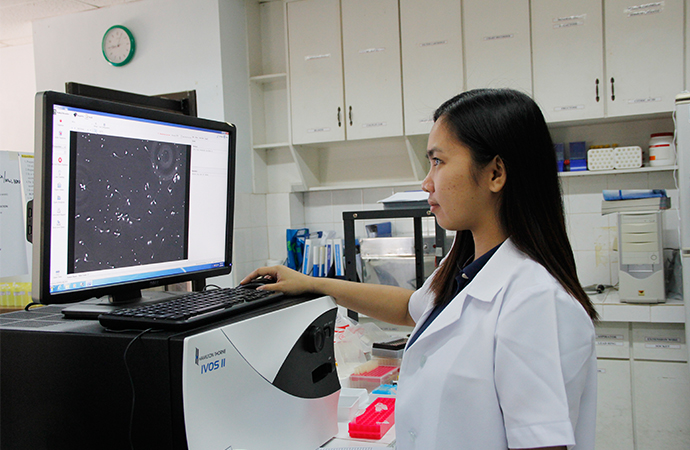 This, as a general rule, is what researchers are steadfastly upholding in so far as the reproductive system is concerned. But they are almost always saddled with the problem of having to go through meticulous evaluation of sperm motility and quality to ensure utmost success.

This problem, though, can now be overcome auspiciously -   thru the use of Computer-Assisted Sperm Analysis or CASA.

The CASA evaluates sperm motility objectively. It provides more accurate data on the speed motion characteristics than the conventional method of sperm motility evaluation which is a subjective microscopic approach.

According to Ms. Excel Rio S. Maylem, lead researcher of the study titled, “Characterization of Sperm Kinematics by Computer-Assisted Sperm Analysis and Its Implication in Genetic Improvement of Water Buffaloes”, conventional method of evaluating or assessing semen quality is just based on subjective observation. As it is widely carried out, it uses morphological description, qualitative approximation, and subjective motility grading which vary among technical staff and from laboratory to laboratory.

The rise of CASA brought a new dimension to semen evaluation, Maylem said.

It provides a quantitative view of the number of moving sperms over the total number of all the sperms counted. It is known to be the most accurate, repeatable, and highly reliable method in determining the kinematics of ejaculates based on measurements of individual sperm cells in almost all species, experts said.

“We need innovation because CASA is now being used across the world to check the quality of the semen.  CASA is more accurate as it is capable of determining the movement of a single sperm  unlike the subjective method in which the sperm is just like going with the flow wherein you see the whole movement but not the individual movement of the sperm,” Maylem explained.

It also gives a numeric value which is more reliable than the observation method, she added. In going about her study, Maylem collected, analyzed and cryopreserved semen samples from six buffalo bulls. Fresh and frozen semen were then analyzed with the CASA sperm kinematic parameters such as average path velocity, curvilinear velocity, straight line velocity, amplitude of lateral head displacement, beat cross frequency, straightness, linearity and wobble.

According to the research, CASA can provide three levels of classification. The first level was based on motility population, how many were motile, and are progressively motile, which cannot be determined when using subjective quality assessment.The second level, is based on the speed of movement, i.e., whether rapid, medium or slow. The third level, on the other hand, is the use of kinematic parameters that makes CASA really different from subjective method. “This is the main essence or value of CASA that others don’t have. It can measure the sperm’s speed from one point to another, the movement of its head, how wide and often they move and how straight they go,” Maylem said.

In doing artificial insemination (AI), the sperm’s movement should be straight to reach the egg. In the subjective method, Maylem emphasized that they cannot determine the path of the moving sperm whereas thru the use of CASA they can see if the sperm is moving backward, straight or diagonal.

“The movement of the sperms present in the straw at post-thaw is of great value so as to ensure that it can reach the oocyte and be able to fertilize it following sperm deposition into the female reproductive tract,” she said.

“When we use CASA, we can only select those with good quality sperms and maximize its use. Our future plan is to trace those bulls with good combination of the sperm movements for it to fertilize the egg,” Maylem said.

Aside from that, the CASA can work across all species, like swine, goat, chicken, horse and even humans. It also has morphology feature that can detect normal and abnormal shapes of sperms.

The study was conducted to enable objective characterization of sperm motility and selection of outstanding buffalo semen donors for AI and eliminate undesirable ones through the use of CASA. In addition, the CASA system was used to enable the generation of different sperm populations based on kinematic attributes, which can be further correlated with their capacitation, fertilization, and reproduction ability.

With this final identification of good and bad freezer donors, the research team was essentially assured of the availability of quality buffalo bulls and semen, which are critical to the Agency’s National Genetic Improvement and Cryobanking Program in water buffaloes.

Another plan of the research team is  to have an association study wherein they will use the AI and pregnancy records as bases in the selection of fertility-rated bulls. They will collect semen of these bulls to determine the sperm combination thru CASA and they need to come up with standard values of CASA for buffalo semen.

“We will start gathering semen from 50 bulls to run under CASA to get the standard values for buffalo. In the study, we only selected and ran samples from 6 bulls and it is not enough to develop a standard that is why we need to conduct another project for standardization of CASA,” Maylem expounded.

She added: “We will select bulls that have high AI efficiency rate and we will assess their sperm thru CASA and associate them with the newly-arrived bulls to develop a standard. It is not possible to use all bulls with good quality semen because our standard values will become high, that is why they should all be homogenous”.

Meanwhile, Dr. Eufrocina Atabay, one of the researchers in the study and head of the PCC reproductive biotechnology unit, said that fertility is equal to high quality semen, perfect timing of ovulation, and good genetics. She said they are still verifying if the good attribute of CASA is directly associated with fertility rate.

“Our initial results are not yet conclusive. We still need verification in the field and further study as there are other aspects or factors that can affect the over-all fertility. It is not only the semen but also the female’s egg that should be studied,” Atabay said.

“We cannot declare that CASA can really enhance fertility rate because sometimes, inside the female tract, there are factors to consider. No matter how good the quality of the semen is, the female system has its own way of rejecting it. But for me, since we are not sure if the egg will be fertilized, it would always be wise to start with a very good quality semen,” Atabay said.

As of today, there are also CASAs installed in the PCC at CLSU, Digdig, Carrangalan, PCC at UPLB, and PCC at CMU for semen production and hopefully, for the standardization and harmonization of researches.