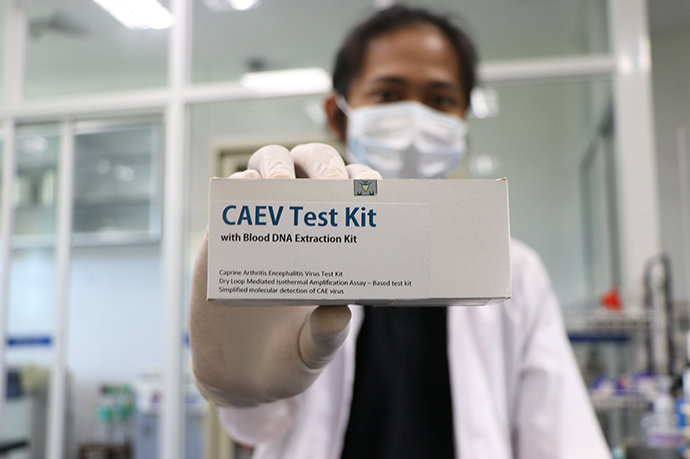 A rapid and cost-effective molecular-based test kit which detects Caprine Arthritis Encephalitis Virus (CAEV) in goats even at the farm level has been developed by researchers of Philippine Carabao Center.

The goat industry in the country is considered as one of the fastest growing agricultural-based industries but emergence of CAE virus is threatening its sustainable growth.

CAE is a multi-organ disease of goats characterized by long incubation period and persistent infection. It has common clinical signs of polyarthritis and mastitis in adult goats and leukoencephalitis among kids. The virus can be transmitted mainly via ingestion of infected colostrum or milk and horizontally via direct contact with the infected animal.

The success in controlling the spread of CAE virus infection depends largely on regular monitoring, early detection and removal of infected animals from the herd. Thus, the development and application of rapid test kit in the detection of CAE virus is significant in the sensitive screening and control of the pathogen/disease.

Detection of CAE virus infection is mainly done through serological and molecular methods such as Enzyme-Linked Immunosorbent Assay (ELISA) and Polymerase Chain Reaction (PCR). However, these techniques are laborious and require expensive equipment that may not be present in some laboratories.

Amplification and detection of the target gene in LAMP can be completed in a single step by subjecting the mixture of sample, primers, buffers and DNA polymerase at a constant temperature between 600C and 650C. A protocol using LAMP technique in the detection of CAE virus was optimized in the Philippines by Dr. Michelle M. Balbin and other PCC researchers in 2014. Using the optimized protocol, CAE virus can be detected within 30 minutes.

The result of the study revealed that the developed CAEV dry-LAMP test kit could detect CAE virus in clinical sample.  There is also no need for sophisticated instrument and it is simply carried out in a heat block or simple thermos. After incubation, positive samples will turn green while negative samples will be orange.

Applying dry-LAMP technique in the detection of CAE virus is a simple method that does not require expensive equipment. It is an effective way to motivate farmers or producers to screen their goats for the presence of the virus and eventually lead to better farm management, disease control, and reduced case or possible eradication of the virus in the herd.

The test kits were evaluated by different research institutions and animal diagnostic laboratories in the country and proven to be effective and efficient.

Currently, the kit is submitted for patenting and will be commercialized soon.