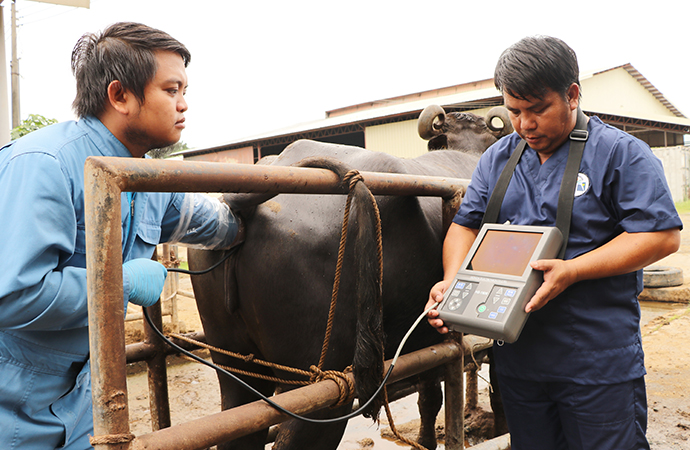 Laboratory results on PAGs in blood as they relate to pregnancy diagnosis were validated through the use of Trans-rectal Ultrasonography at day 40 after insemination. (Photo by Charlene Joanino, DA-Philippine Carabao Center)

One of the most common problems faced by a dairy farmer is the detection of pregnancy of a buffalo at the earliest time possible. The shorter the calving interval is, the more profit a farmer gains because rebreeding can be done promptly and additional expenditures can be avoided. Not only silent heaters can be determined but non-pregnant buffaloes as well.

Researchers at the Philippine Carabao Center (PCC) found that the presence of Pregnancy-Associated Glycoproteins (PAGs) in female buffalo’s milk and blood at a certain level is an indication of pregnancy.  PAG is a protein secreted  by the binucleated cells  in the placenta and released in the blood circulation at 22 days of pregnancy.

PAGs primarily combine with blood amongst others, which makes it an effective means of detecting pregnancy. Plasma comprises a huge portion of blood and is extracted from the animal. The process is invasive and makes use of 18 gauge needles on a heparinized tube in obtaining samples.

Fixed Time Artificial Insemination (FTAI) was administered to a total of 24 female cows who served as the sources of 10 ml blood samples. FTAI is a means of breeding that is done at a determined time instead of the traditional method of mating using bulls.

The conducted FTAI had a conception rate of 54.17%. Levels of PAGs in blood increased gradually and decreased at day 270 to day 300. It was observed that PAGs from previous pregnancy disappear after 8-10 weeks.

Laboratory results on PAGs in blood as they relate to pregnancy diagnosis were validated through the use of Trans-rectal Ultrasonography at day 40 after insemination.

The research on PAGs in milk using Enzyme-Linked Immunosorbent Assay made use of 5ml samples from the selected female dairy buffaloes from PCC Gene pool. FTAI was administered to 37 buffaloes. The 8 buffaloes that became pregnant and 8 buffaloes that aren’t were chosen for the study.

In comparison to blood collection for PAGs detection that uses needles, collection of milk is not stressful to the animal.

Blood sampling and use of ultrasonography was also simultaneously done upon acquiring milk samples to compare the efficiency of the three and determine if there is any significant relationship.

A key difference of milk analysis for PAGs detection is that its components such as protein have an effect to the value of PAGs. Therefore, the level of PAGs in blood is different from that of PAGs in milk at pregnancy.

Both of these researches are geared towards the development of a portable kit similar to a person’s pregnancy kit. More related researches on PAGs by PCC are expected to be conducted in the years to come.