Carapreneurship: A venture worth pursuing 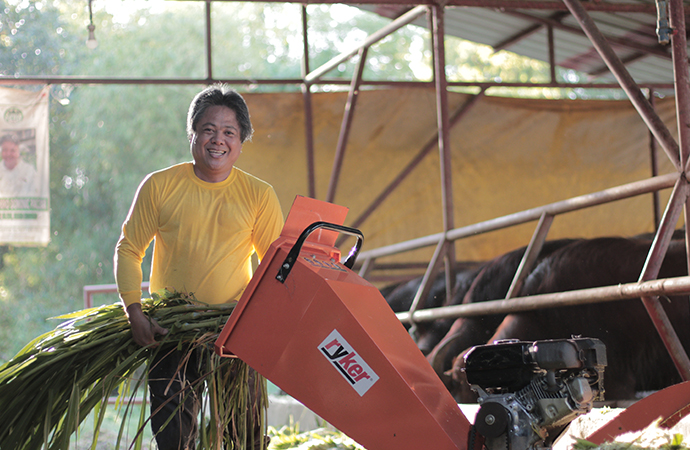 Dominic Paclibar of M’lang, North Cotabato started his buffalo dairying venture when the DA-PCC at University of Southern Mindanao entrusted to him a number of buffaloes that served as start-up stocks in his D&L Dairy Farm. Dominic used to engage in rice milling business, but is now into dairying and selling of Napier grass as his main source of income. (Photo by Rowena Bumanlag, DA-Philippine Carabao Center)

Dominic Paclibar of M’lang, North Cotabato saw in his vision what it was like to be in a carabao-based dairy venture. He decided to pursue that trail in 2019 and is now treading along a stream of benefits and opportunities abounding in carapreneurship.

Dominic’s and wife Ma. Elisa’s dream for their own family was like any other Filipino parents. The couple strived to work doubly and even overseas for a sustainable livelihood to secure their future.

By a stroke of fate, while pursuing their family dream, Dominic learned of the Carabao Development Program (CDP) being implemented by the DA-Philippine Carabao Center at University of Southern Mindanao (DA-PCC at USM) and was immediately convinced that he should try his luck in joining the program.

The course of his pursuit of a successful family life changed since then.

“I am grateful that I came to know the channel of blessings that will bring me my very own package of blessings,” Dominic reflected on his first meeting with DA-PCC at USM Center Director Benjamin John C. Basilio when the latter was initially encouraging Dominic to engage in carapreneurship.

In May 2019, Dominic enthusiastically obliged to the invitation and participated in the “Farmer Livestock School on Dairy Buffalo Production (FLS-DBP)”. The FLS-DBP is a learning modality conducted by DA-PCC for farmers to have technology options and to capacitate them to maximize the benefits that can be derived from carabao-based enterprises.

After graduation from the 34-week training and deliberate evaluation of his qualifications, Dominic was identified as a recipient of a Dairy Buffalo Module from the DA-PCC at USM on the same year. In this module, 25 head of dairy buffaloes were turned over to Dominic for his initial stock.

In the first two years, while Dominic was waiting for his buffalos to produce milk, he engaged in Napier grass production.

“Way before the dairy animals arrived, I developed my 11-hectare land for planting to Napier grass as an initiative to store feedstuff for the herd. I didn’t know that this could very well be an additional source of income for me,” Dominic said.

He sells 15 tons of Napier every month to dairy buffalo raisers like himself, giving him an extra income of Php7,500.

As a farmer whose mindset is cut out for business, Dominic explores spin-off ventures out of his dairy buffalo-based enterprise. He does so by actively participating in related activities, including trainings and other learning events, conducted by PCC at USM. Dominic believes that continuous learning can bring him more success in his newfound venture.

In 2020, Dominic’s farm started to flow with milk.  While he was earnestly waiting for this time, he was initially anxious on where to bring his produce and who are willing to take them.

“People are aware of the many benefits of drinking carabao’s milk but it’s demand in the market is still very low,” he griped.

This was another instance when DA-PCC at USM stepped in to help Dominic overcome a challenge that most farmers in the dairy business have also encountered.

“I appreciate DA-PCC at USM’s readiness to assist whenever farmers like me are in challenging situations such as in marketing our milk and dairy products. The extra mile that they do is consistently motivating us to keep going and doing well,” Dominic uttered.

Dominic’s dairy farm, the D&L Dairy Farm, is now accredited by the Department of Trade and Industry and is undergoing FDA certification.

“Patience has to be the virtue behind any struggle. It is in patience that hardships  are seen rewarded in the end. If we don’t give up on hardships, we come out stronger and have a taste of sweet success.”

Today, the dairy farm produces an average of 1,050 liters of milk monthly that he processes to dairy products including fresh milk and flavored milk. These products are now available to customers in Davao City, Digos City, Matanao, South Cotabato and in the Province of Cotabato.

Dominic is also one of the suppliers for the SBFP-Milk Feeding of DepEd Cotabato and South Cotabato Divisions.

While devotedly pursuing his own track in carapreneurship, Dominic knows that he will still be presented with challenges but is now ready to confront them head on. He recognizes that there will be highs and lows in the business but to experience the peak of his success means that he has to continue treading on.