‘Juan’ advice to those who ‘Juana’ succeed in the dairy business: Perseverance + teamwork should do the trick 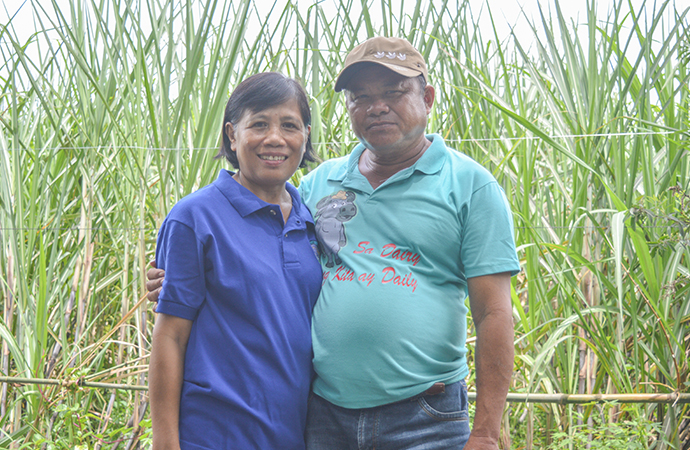 “Dedication and patience are key to starting a dairy business. Carabao production is not ‘easy money’. We worked hard to get to where we are now.” - Dionisio Capillo (Photo by DA-PCC at West Visayas State University)

“Waay guid ko nakapaminsar nga untatan ang pagsagod sang karabaw bisan ano kabudlay kag kalawig sang hulaton mo antis ikaw makaginansiya. Du karon nga may walo dun kami ka karabaw kag nabatyagan na namon ang masulhay nga pangabuhi. Kung akon madumduman, mayad lang nga nagpadayon kami bisan budlay lab-uton ang amon mga handom [I never had thoughts about giving up on taking care of our carabaos despite all the difficulties and the long wait until we earn an income. Now that we have eight carabaos in our care, we are starting to reap the fruits of our labor. Looking back, I am glad we didn’t give up when everything was hard and our dream seemed unreachable],” Dionisio Capillo averred.

Interviews are not new for Dionisio and Wilma Capillo. This humble couple has played a model role to fellow farmers because of their undeniable commitment in making their dairy carabao venture an evident success. Their secret is no secret: teamwork.

Outside their dairy enterprise, Dionisio works as a bank collector. But before his official work hour even begins in the day, his daily grind starts in the farm at dawn. His routine includes feeding, bathing, and milking the carabaos with his son Joel, 26.

What was most challenging at first to the couple was when they had to cut and carry grasses to feed the carabaos. But with the help of DA-PCC at West Visayas State University’s (DA-PCC at WVSU) training on feeds and feeding management, the Capillos have acquired skills on silage production and growing their own feed resource.

As they progressed in the venture, both Dionisio and Wilma agree that taking care of the carabaos should not be burdensome given the right technologies and training.

The joy that the couple feel about this venture is also because of the fact that each has their respective roles in the business. While Dionisio takes care of the production aspect, Wilma takes on the crucial responsibility of diligent data recording and monitoring. The daily status on milk production and animal health are monitored. Treatments that are administered to the animals such as A.I., pregnancy diagnosis, uterine flushing, and California Mastitis Test are also consistently kept in the records.

She also tracks the calving date, the start of milking, and the body condition of the milking cows.

“I ensure that our milking area is clean before we start milking. The volume of milk that we produce daily is recorded for us to know how much milk we are producing each day, how much we will earn, and when our milking cows are expected to dry off,” Wilma explained in Hiligaynon.

With eight carabaos, Wilma shared they developed a knack for identifying which one is which among the carabos in their herd.

“We assign unique names to each of our carabaos for us to easily identify them. One is named ‘Valentina’ because she was born on Valentine’s day and another is named after our daughter Joy because every earning from that carabao are for Joy’s school expenses,” she added.

The Capillos engaged in carapreneurship in 2010. The couple shared they went through highs and lows in the business but they see it as their saving grace when it comes to financing their children’s education.

“Our dairy business has helped us finance our children’s education. We are proud to say that we were able to send them to school without incurring any debts. The carabaos were enough to sustain us. That’s what I tell my children--that they should not be ashamed of our source of livelihood. Wherever you are now, our carabaos have a significant part in your success,” Wilma shared.

Wilma said they were, in fact, able to finance the renovation of their house which they later on dubbed as “Katas ng Gatas ng Kalabaw.”

With the help of their son, Jun Kwollen, who currently works as a seafarer, the renovation of their house and improvement of their farm slowly became a dream come true. When asked about their future plans, Dionisio plans to expand their dairy business given an ideal area.

His advice to those who plan to start a dairy business such as theirs: “Dedication and patience are key to starting a dairy business. Carabao production is not ‘easy money’. We worked hard to get to where we are now.”