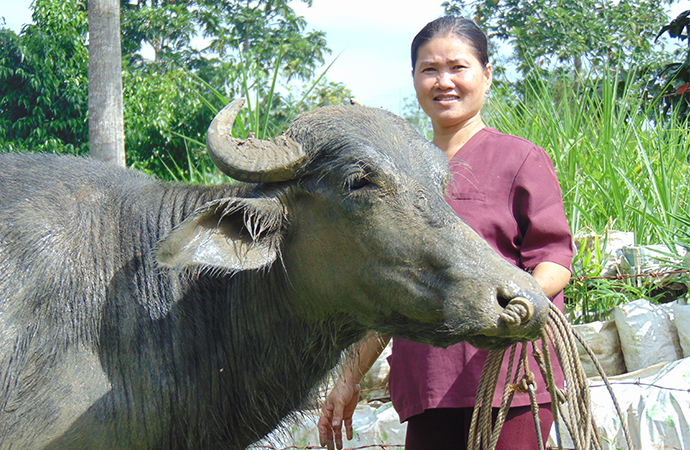 “A person who strives hard will succeed. Look at me, I am a woman but I can succeed.” - Elisa Florenosos (Photo by DA-PCC at Ubay Stock Farm)

Elisa’s challenging journey as a woman in love was ill-fated as she experienced not only one but three failed relationships. One of which brought her to Korea only to be left alone all feeling betrayed.

While trying to move on, she brought herself to a tough grind to survive in a foreign land. Working from one company to another was not just for her own survival but to be able to send money to her family back home in the Philippines. To her, tending to her family’s needs was her priority while mending her broken heart only came second. She even took the extra hard work to invest for her family to have a livestock and rice production business and a good amount for lending.

In 2009, she had to come home to attend to her mother’s funeral. While still grieving for the loss of her mother, Elisa went through a long series of unfortunate events.

Then in 2012, Elisa didn’t know that her life was about to go a fateful turnaround. A dairy technician convinced her to attend a seminar on the national carabao development program. In high hopes that this could be the enterprise that will bring her luck, Elisa gave it a try and immediately, she got interested about the topic.

Her journey in the dairy business started with one native carabao, owned by her father, that was initially being taken care of by her brother. She recalled that her first milking session gave her half a liter a day translated to a monthly sales of Php1,500. She shares this income with her brother for tending the animal. In their second month of milking, their income increased to Php2,500. This sale steadily increased in the succeeding months up to an earning of Php5,000 every month.

She was already getting enthusiastic about this newfound venture but it seemed the series of life’s challenges is far from ending. Her brother got hospitalized for acute ulcer. Bills needed to be settled so she had to sell their milking carabao. However, her sacrifice to save her brother’s life has gone futile as he still died.

Upon learning of Elisa’s story and dedication to improve her livelihood despite tending just one carabao, the DA-PCC at Ubay Stock Farm (DA-PCC at USF) awarded her with one Murrah buffalo in 2013. She also tends animals in her neighborhood under a “paiwi” scheme for additional income. She even went as far as replacing her cattle with a carabao to add to the number of her milking carabaos.

To date, Elisa has two milking carabaos, which give her an average income of P8,0000 per month, and three calves. With this money, she is able to sustain her family’s daily needs, and finance for her house repair and home improvement

Elisa’s testimony of perseverance lends meaning to her life’s purpose as she positively influences her community. She is often asked to share her story in a crowd of farmers during gatherings. She was at first hesitant because of her speech impairment but she knew that her life’s story could bless others and encourage them to charge on even when painfully challenged.

With her talks, she was, in fact, able to inspire five more farmers in their town to engage in dairying.

As a woman, Elisa believes that her weakness is also her strength and that being a male or a female has nothing to do with success.

Elisa is now happily settled with dairying. Together with her current partner, they aim to increase their milking animals to at least five, and improve their animal shed and milking parlor with the money that they are earning from the business.

As the DA-PCC at USF’s recognized #OneDArfulJuana for 2020 for her resilience despite everything that she’s been through, Elisa proves that a pure heart can never be truly shattered. It will only continue to grow even stronger until it has found to beat again for its ultimate purpose.