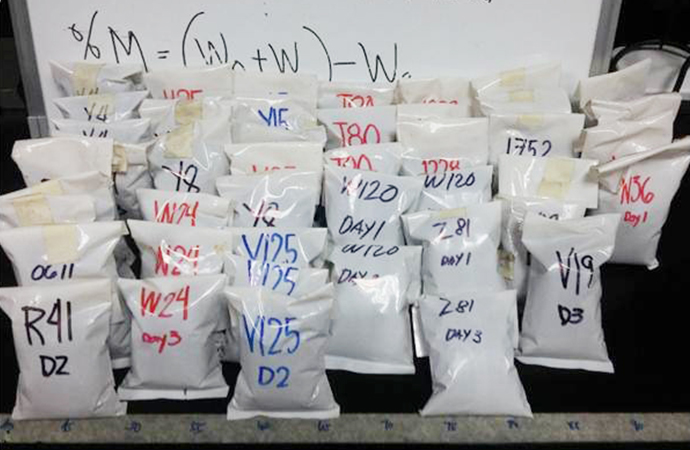 Corn distillers dried grains with soluble (DDGS) are packed for the specific treatments.

Dairy carabaos’ milk can be increased by feeding them with corn distillers dried grains added with solubles (DDGS), a study by PCC showed.

They said the carabaos fed with as much as 50 percent of DDGS yielded higher average milk production compared to those fed with only 25 percent DDGS concentration.

The study was funded by PCC in collaboration with a private DDGS supplier. The DDGS, explained the researchers, is a by-product of corn grain fermentation in the ethanol industry in the United States. It is used for dairy cows as it is a very good source of protein for the animal.

Since it is dry, it is the most easily transported by-product in the production of ethanol.  It can also be easily stored under reasonable conditions for considerable period of time. In the study, all the buffaloes  fed with 50 percent of DDGS, as a replacement of the commercial dairy concentrates, were noted to have increased their milk production after 120 days .  Those fed with only 25 percent DDGS had lower average milk production and the animals which were not fed with DDGS registered the lowest milk production during the entire duration of the study.

They cited  the US grains council saying that this feed material has high energy, mid-protein, and high  bioavailable phosphorus content that make it a very attractive, partial replacement for some of the more expensive energy  sources  such as corn, protein-rich diet  like soybean meal, and phosphorus such as mono-dicalcium phosphate used in animal feeds.

They further said that when DDGS is added to properly formulate feed mix, it resulted in the animal’s excellent health and performance and in their food product quality. These attributes have made DDGS one of the popular feed ingredients for use in animal feeds around the world.

Other than increase in milk production, an increase in the sales of milk yielded from those fed with DDGS compared to those which were not was also noted.

The use of DDGS in the animal’s feed, was also found to be a big money saver.

“The expense was only Php8.58 for a kilogram of milk produced by the carabaos fed with 50 percent  compared  with those fed with 25 percent DDGS, with Php9.74, and Php11.49  for those without DDGS,” the researchers said.

To get more conclusive result,  the researchers recommended longer feeding of DDGS to lactating buffaloes covering one or more cycles of milk production.