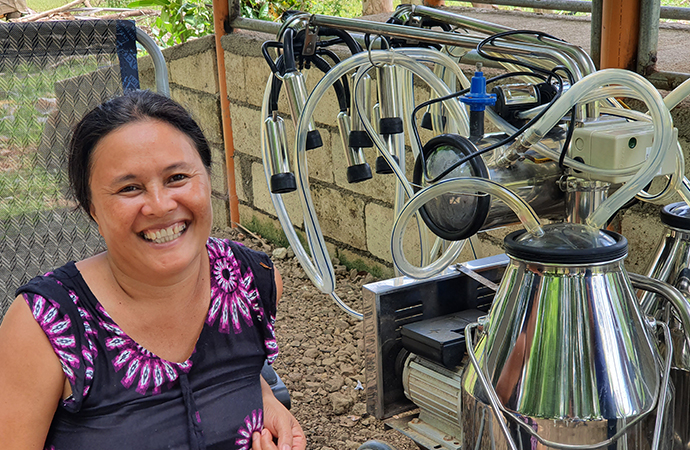 Barely making it to the first level of education, this Juana was hard up for basic necessities that it was unimaginable for her what it feels like to have a decent living. Luck must have found its way home to her that when she dropped a tear on something that she is passionate about, it created a ripple of positive effects in her community.

What she was passionate about is also now the very livelihood that 55 other townspeople in the community are raving about. All of whom she influenced by her grit and guile.

She is Grace G. Boyles, 41, of Mabini, Bohol, a model dairy farmer. She is a member of San Jose Dairy Buffalo Producers Association, a cluster association of Bohol Dairy Cooperative. Once a maidservant in Manila, her unfavorable experience and longing to be with her family made her decide to come back home and try her luck in dairying.

Convinced in the business proposition of a dairy buffalo-based venture, she joined the Mabini Dairy Multipurpose Cooperative (MADAMCO) and was granted with two American Murrah buffaloes. Five years later, she started milking the animals that are then producing an average of 4 liters of milk daily and sold at Php45 per liter. This became her family’s source of monthly income, which, usually, would average to Php5,000.

Grace was then the only woman in the association who was milking her buffaloes.

But it was not all smooth sailing for Grace. She could still recall how many times she cried while milking her animals, feeling downtrodden knowing that her husband does not approve of milking their animals because for him it should be fed to the calves. But bestowed with enduring spirit, Grace persisted and did not give up.

Her grit qualified her to receive additional carabaos from DA-PCC until her herd grew from two head to 17. Coupled with the recommended breeding activities and good care and management, Grace’s income  later hit Php27,000 a month. This gave her the leverage to finally convince her husband to support her in the business. Their teamwork later on earned them the money to fund their house renovation and their nieces’ college education. Her farm has also generated jobs in their community.

With this venture, Grace not only improved her livelihood but also made a role model out of herself that the community now looks up to. She was able to establish good influence among the townspeople who positively receive her testimonies whenever she gets a chance to preach the benefits of dairying.

As a model farmer, she opened her farm to anyone who wishes to take a tour or learn about the dairy business.  From then on, she has become a constant partner of DA-PCC at Ubay Stock Farm in coaching and training newbie carapreneurs during actual immersion in dairy production. In one instance, she offered to take care and milk a newly-calved carabao under a 50-50 profit sharing arrangement with the owner. With genuine intention to demonstrate that dairying is indeed profitable, she even offered her milking carabao as paiwi and start-up stock to her relative.

Today, she has helped the community produce milk from an average of 4 liters a day to 80 liters a day. To her, being a woman should not be a hindrance to success.

“Di nato himoong rason ang pagka-baje. Ang importante nga makatabang ta sa atong bana”, (Let us not make being a woman an excuse, what is important is that we can help our husband provide for the family.) she added.