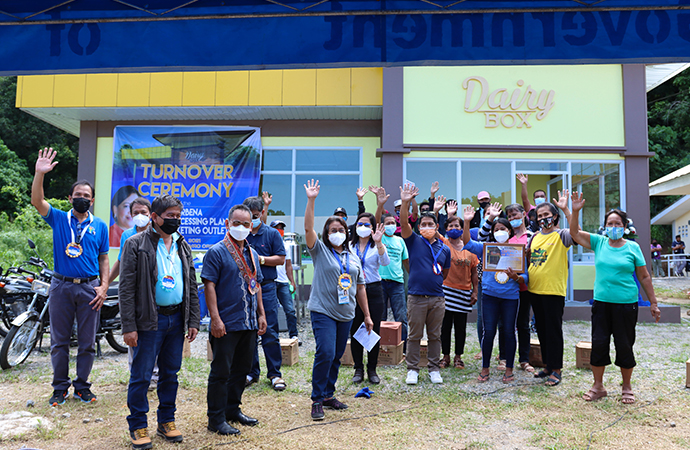 Members of KARBENA happily show off the certicate for the new dairy processing plant and marketing outlet awarded to them by the DA-PCC under the ALAB-Karbawan project.

The said facility will serve as the hub in processing of buffalo’s milk and in marketing of dairy products that will be enjoyed not only by the people of the City of Mati but also in the whole province of Davao Oriental.

Aside from the building, DA-PCC also turned over motorcycles, refrigerators, milk cans, mother and field AI tanks, AI kit and other equipment needed in the said building.

DA-PCC Deputy Executive Director for Admin and Finance Dr. Caro B. Salces shared success stories of dairy farmers to insp ire participants by saying: “It is not easy to take a step into dairying but we at DA-PCC and our other partners are always here to support you.”

In an interview, City Mayor Michelle Rabat gave assurance to the farmers that they have the full support from the city government of Mati in implementing the carabao development project.

Meanwhile, DA-PCC at USM Center Director Benjamin John C. Basilio, represented by Jeffrey A. Rabanal, extended his gratitude to DA-PCC’s partners for rolling out such project.

DA-PCC at USM CBED Coordinator Nasrola Ibrahim also expressed his appreciation to the farmers who have been actively participating since the beginning of the project. “Without our main actors (farmers), we are nothing. This project will not be successful without their efforts,” Ibrahim added.

In addition, KARBENA Chairman Rhodora Datar gave her word and pledge to take care, sustain, and develop the ALAB-Karbawan project in the city.

KARBENA is one of the associations and cooperatives in the Philippines who received ALAB-Karbawan project components worth Php10M, as funded by the Senate Committee on Agriculture, Food, and Agrarian Reform headed by Senator Cynthia A. Villar.