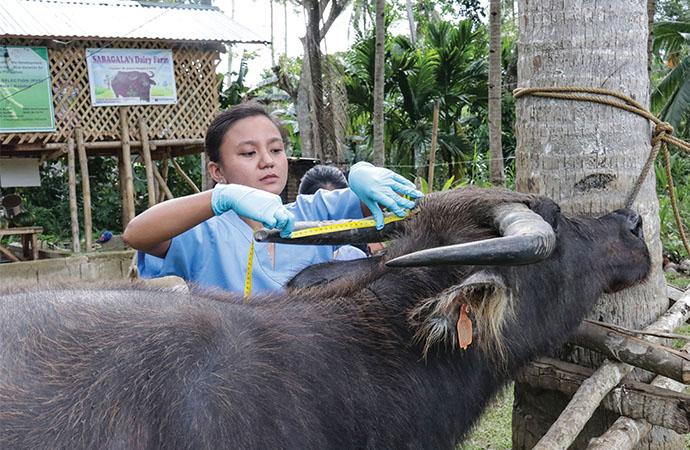 Researchers record the body measurements of animals as part of gathering baseline information on morphological characterization of swamp buffalo in the Philippines.

Characterization and classification of swamp buffaloes, however, could be a lot complicated. Merely relying on a swamp buffalo’s physical traits such as skin color, the shape of horns, and body type, would be impractical and inaccurate given a huge population size.

Another way to properly classify an animal's ancestry is through genetic analysis based on their deoxyribonucleic acid (DNA) traits, which are unique to each living organism but will require different biotechnological processes and trained personnel to produce scientific results.

Different concepts and techniques involving physical characterization and imploring molecular biotechnology tools and processes in analyzing the DNA characteristics of the swamp buffalo's population were performed. This involved collecting blood from the animals where DNA was extracted from, making more copies of DNA using the Polymerase Chain Reaction (PCR) Method, sequencing, and statistical and bioinformatics analysis.

Significant findings were derived from a sample of 107 Philippine swamp buffalo in 23 different populations of Luzon, Visayas, and Mindanao islands. The study revealed the presence of both maternal lineages A and B in the sample population using the mitochondrial DNA D-loop region variation. Also, the relationship analysis for the three main islands groupings of the Philippines, namely Luzon, Visayas, and Mindanao, was determined. Results showed the presence of maternal lineages A in all these major island groups of the country. However, it should be noted that a strong presence or affinity of maternal lineage B was observed in Occidental Mindoro in Luzon and Capiz in the Visayas.

A distant relationship was also observed on the genetic relationship per inter island basis in animals living in Luzon and Mindanao. The close relationship observed between Visayas and Mindanao swamp buffaloes can be attributed to the vast distance between these major island groups. This can also be explained by the historical event of the early migration of Visayan farmers and their carabaos to cultivate the agricultural land of Bukidnon province in Mindanao.

These findings set new priorities in R&D pertaining to both on-site (in situ) and off-site (ex situ) conservation management processes like actual conservation of animals in their natural habitat and storing animal genetic traces such as semen and blood samples, respectively.

Efforts along this line could pave the way for future planning and strategies that will enhance the implementation of native animal genetic resource conservation.

The research outputs emanated from the DABIOTECHR1506 by LPVillamor, EBFlores, ASSarabia, AMParaguas, AJDSEscuadro, and PC Cailipan, which was funded by DA-Biotech and DA-BAR. In addition, an extension work as part of the dissertation of LPVillamor was conducted under the mentorship of Dr. Koh Nomura, Dr. Yukimizu Takahashi, and Takashi Amano in Tokyo University of Agriculture, Atsugi Campus, Japan through the Ph.D. by research Tokyo NODAI-SEARCA scholarship.