Carapreneurship with a youthful touch 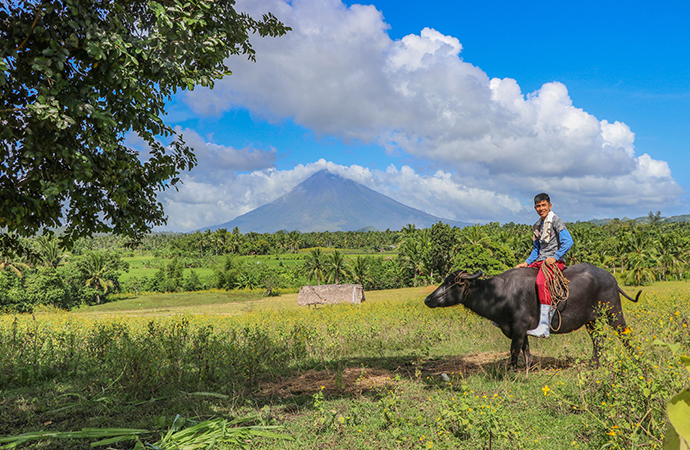 Championing both farming and carabao industry at the age of 24, Domingo Astillero Jr. from Guinobatan, Albay is challenging the youth’s perspective towards agriculture today. Astillero proves that the young generation plays a crucial role in realizing a sustainable and food-secure future for the country.

Food security is one of the primary concerns of the government during this pandemic. The crisis accentuated the demand for agricultural products more than ever. This problem along with the decreasing number of farmers only stress the need to enliven the industry, especially during these critical situations.

Food production has always been and will always be relevant. At the same time, there is always income in the industry and more opportunities can be offered with steadfast support from the government. In realizing the vision of a food-secure Philippines with prosperous farmers and fisherfolks, the young generation plays a crucial role.

Domingo Astillero Jr., also called as ‘Doming’ by the locals is a 24-year-old carapreneur from Barangay Malobago in Guinobatan, Albay. Championing both carabao and the farming industry at his age, Doming is challenging the perspective of many youths today towards agriculture.

Interest in agriculture or farming is increasingly waning among the youth. Data from the Philippines Statistics Authority in 2018 shows that the average age of farmers is 55 years. Many young people would prefer the work in the city over the traditional strenuous farming.

Despite this trend, Doming chose to embrace the provincial life after completing his degree in Bachelor of Science in Education major in Mathematics at the Bicol College. Except for him, all of his siblings went to search for opportunities in Manila and eventually built a family life there.

Being the youngest among four children, their neighbors didn’t expect Doming to be the one who would choose to stay behind and  help his parents tend the farm. Recognizing his passion and skills in farming, the barangay officials would always consider him as a participant in capacity-building projects such as the Farmer Livestock School on Dairy Buffalo Production (FLS-DBP) of the DA-PCC.

Attending the FLS-DBP has been a life-changing decision for Doming. This learning course encouraged him to expand his agricultural ventures to include buffalo production. With the backing and recommendation of the barangay, Doming received two dairy buffaloes through a loan.

FLS-DBP is in line with the Accelerating Livelihood and Assets Buildup (ALAB)– Karbawan projects, which is composed of the two province-wide Carabao-based Enterprise Development projects namely Carabao-based Business Improvement Network (CBIN) and Coconut-Carabao Development Project (CCDP). Under the CBIN the FLS-DBP is one of the capacity-building trainings given to farmers and partner LGUs.

“I learned a lot from the training. Now, I am trying to apply them one by one,” Doming said. “I’m taking it slowly due to limited financial resources but I am hopeful that soon I will be able to have a milking barn constructed for our dairy buffaloes,” he added.

The young carapreneur’s family is not at all new to carabao raising. Doming was used to seeing the carabao as a dependable help for their farm. The family owned a carabao that they used to plow the field where they planted crops like rice, maize, and peanut. Prior to the FLS-DBP, Doming said they had no idea that the carabao could be used for dairying.

“We only had native carabaos in the farm before. Now that we have the dairy buffaloes, we saw how milk production could significantly improve our venture in agriculture,” he said.

Doming admits that farming crops take a lot of hard work and harvest time takes months. This is why the promise of daily income in dairying persuaded him to go into dairy buffalo production for additional income and because economic crisis was then at hand due to the pandemic.

The young carapreneur has his plans already set on constructing a milking facility for their buffaloes. His ultimate goal was to significantly contribute to the build-up of dairy buffalo population in the area. Although he experienced birth pains when starting with the business, the young carapreneur’s resolve shows optimism for the future.

For Doming, farming is not just a livelihood but their family’s heritage that can be passed from one generation to another. He believes that producing food for the people is a noble profession and is ever-relevant. And this belief is anchored on what was taught to him by his parents since childhood and he is forever grateful to them.

“I enjoy doing the chores in the farm while earning plus the fact that you have yourself as the boss,” he said.

“We should also help our parents because there are others who were raised thru farming but they forget all about it after getting jobs,” he added.

Doming is also aware of the anxiety faced by many youths today because of the pandemic.

“Look for simple things that you can do for a living like how I chose a work that I enjoy. Raising crops and taking care of animals make me happy. Try farming because it is an honest and noble job. It is a job that serves many people,” he said, as he encouraged the youths.