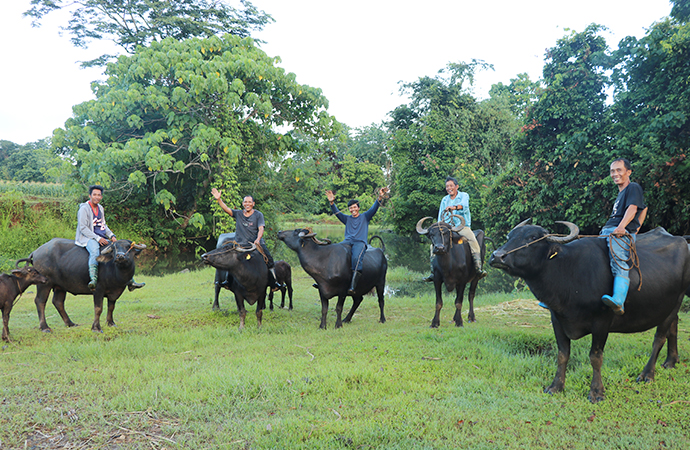 Carabao owners have gained appreciation of dairying and are gradually shifting from traditional to PCC-recommended animal care and management.

San Agustin is a far-flung mountainous town in Isabela province. Secluded and sprawled with mainly grasslands, this town lends anyone clueless of its hidden worth.

This laid-back town is home to 4,207 dairy buffaloes that are currently under the care of farmers being assisted by the Philippine Carabao Center (PCC) at Cagayan State University (PCC@CSU). If these animals will produce milk, then the local dairy industry is anticipated to boom in the province.

With this great potential in mind, PCC and the Philippine Council for Agriculture, Aquatic, and Natural Resources Research and Development (PCAARRD) collaborated on a project titled “Strengthening the San Agustin Crossbred Carabao-Based Enterprise Development (CBED) Model” to be funded by the latter.

Also called “Project 5”, this collaboration, which started in January 2016 and will end next year, aims to help dairy cooperatives in 23 barangays of San Agustin.

Dr. Kevin Dave Cho, project attending veterinarian, said the goal can be achieved with the full cooperation of dairy farmers in the town.

“We are aiming to create new associations out of the 10 unregistered farmers’ groups with the assistance of staff from PCC national headquarters including Hanah Halotjot, Armando Reyes, and Celso Quinet of PCC@CSU,” Dr. Cho said.

Relevant to this objective of boosting the carabao dairy industry in San Agustin, four other related projects are also being implemented in partnership with PCAARRD in the fields of animal nutrition, breeding, health, and quality control of buffaloes’ milk.

Dairy farmers are also set to undergo social preparation training to maintain harmonious and productive relationship with their co-members in the association. A healthy relationship among members is seen as crucial to bringing the organization to collective success.

“While many farmers are used to tending their carabaos as they practically grew among these domesticated animals, most of them are still into the traditional methods of care and management. This is why we know that the technologies of PCC on carabao raising and dairying can improve their livelihood”, Dr. Cho said.

With the string of PCC-led interventions that are laid out and implemented to promote dairying in the town, more and more farmers in San Agustin are gaining knowledge on the benefits of milking their dairy carabaos.

Those who are already milking their animals sell their produce to San Agustin Dairy Cooperative (SADACO) at Php50 per liter. Payouts are made on the 15th and 30th day of the month.

Among the dairy cooperatives in San Agustin, Sinoangan Sur Dairy Association (SSDA) headed by Chairman Genielex Raymundo produces the highest milk yield. The chairman said this is a result of their constant campaign for members to engage in dairying.

SADACO serves as the marketing arm of all the milk produced in San Agustin with a processing plant manned by Joel Cabading who is also the manager of SADACO.

The project team estimated to produce 197,000 liters of milk within the three-year period of the campaign.

“Everyone here in San Agustin should realize that this vision is not an accountability and role of PCC alone but more of the barangay officials”, Dr. Cho emphasized.

Because of the cooperation between the implementers of the project and the barangay officials, carabao owners have gained appreciation of dairying and are gradually shifting from traditional to PCC-recommended animal care and management.

For example, farmers previously did not like to sell the milk produced by their carabaos because they would rather feed it to the calves but this attitude has now changed.

As transformed perspective on dairying and the benefits of good practices on dairying are continuously observed, it is anticipated that toward the end of the project, what used to be a remote and shy town will soon gain its fair share of fame and fortune; in the dairy industry, that is.