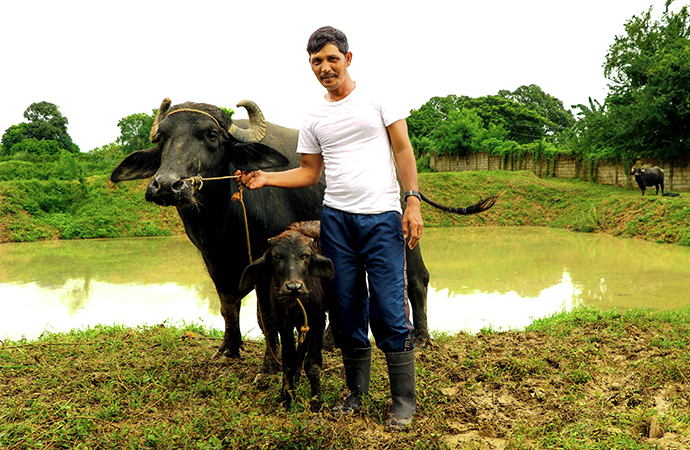 Vicente Santos Jr. proudly shows off his dairy buffalo (whose sire is a true albino) and its calf. Not only does the former help him provide for the needs of his family through its milk production, but it also boosts his passion in rearing carabaos.

It is but natural for humans to look for and admire something of unique and amazing characteristic—a distinction that would easily catch attention.

Alluring is a “true albino” dairy buffalo. This is said to be very fascinating due to its appearance that is different from the usual black carabaos. A carabao or buffalo that is considered an albino has a white fur and pinkish skin because of the absence of melanin pigment; the distinctive characteristic of a ‘true albino’ is caused by albinism that is a recessive trait. An albino is also considered as light sensitive and is prone to eye cancer.

On a positive note, an albino of whether a purebred or a carrier type could give a high yield of milk because of its good genetics.

The joy of having albino-carrier buffaloes

Vicente Santos Jr. and Ryan Delos Santos, both from San Miguel, Bulacan, are two of the privileged carabao-keepers raising albino-carrier buffaloes, which are offsprings (through artificial insemination) of a “true albino” buffalo.

Vicente is a 46 year old carabao raiser from barangay Magmarali. He has been engaged with carabao-raising for the past 22 years, a livelihood that he inherited from his grandmother.

Based on Vicente’s description, his albino-carrier buffalo is a docile animal with a long tail, and has a higher milk production compared to his other dairy buffaloes. It has five teats that make it more different from the others that he is currently taking care of.

He brings an average daily yield of 26 liters of carabao’s milk to a milk candy store in a nearby barangay – Pulong Bayabas, every day. This milk yield was collected from his three dairy buffaloes. All of which are crossbreds.

Each liter of milk was bought at an average cost of Php30, but if the milk will be picked up from the dairy farmer’s place, it will only cost Php25 per liter. From October to December, the milk price increases up to Php35 a liter.

Vicente survives the needs of his family through milking buffaloes, farming of rice, vegetables and other crops. He proudly shared that he was able to sent all his children to school through this livelihood. In fact, one of his children is already a training seaman in Manila, the other one is currently in college while two more are presently at secondary education.

Aside from the financial benefits gained from the dairy buffaloes, it is also evident that Vicente has the passion for raising carabaos or buffaloes. “It gives me joy whenever I see my buffaloes”, he said.

He also stated that these dairy buffaloes really help to sustain them for their everyday needs. Milk from dairy buffaloes gives them cash weekly, which is often used for buying groceries during Saturdays or for buying school supplies.

“Raising carabaos gives double benefits because by feeding them I am also able to clean my farmland”, he added.

Meanwhile, the same kind of happiness takes over Ryan, a 35 year-old carabao raiser at the nearby barangay - Balong, San Miguel, Bulacan. Since Ryan is a bachelor, he said that the money he gets from the sale of carabao’s milk is more than enough for him.

He narrated that during the pregnancy of his buffalo with its third calf, it unfortunately had a miscarriage at 7 months and 20 days. Without much reason and explanation, their attending AI technician advised him to milk the albino.

Despite his hesitation to milk the said buffalo, he tried to do so, after which, he was amazed that it gave 10.5 liters of milk daily that eventually went down to 4 liters a day at its drying-off period. Since then, he was more convinced that this buffalo could potentially give higher milk yield.

“I really prefer rearing a carabao for livelihood. Whenever there are unexpected expenses, I can actually get money from selling a carabao but I choose not to because as much as possible I don’t want to sell them”, he added.

The first calf of the albino-carrier was sold due to lack of money. However, his experiences throughout taking care of the said animal gives him more reason to cherish all other buffaloes that he has right now. “Hard work really pays off in raising buffaloes, even if it requires time and efforts, it is all about loving what you are doing”, he said.

Ryan sells his milk to a candy store for Php26 per liter. He is expecting to have more milk yield from the 2nd calf of his buffalo, which is currently around 2 years of age.

Taking care of buffaloes requires bundle of perseverance and determination, but for Vicente and Ryan, this is a blessing not just because of its financial value but for the hope and joy they bring to their lives.