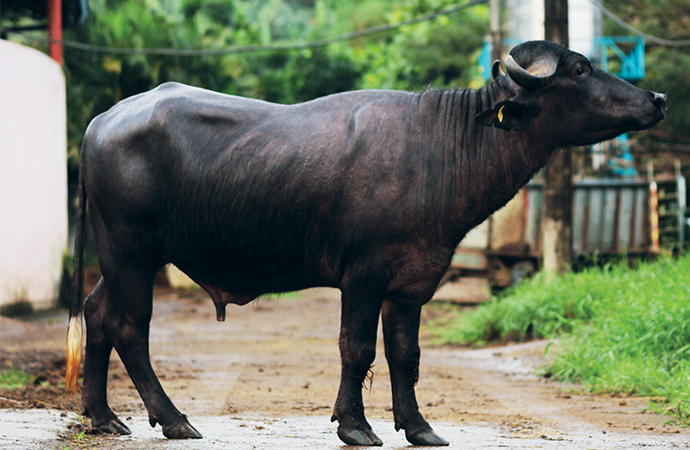 Zeus is measured with the highest EBV of 599.50. This bull was born at PCC at Central Mindanao University (PCC@CMU) last September 28, 2014 and then transferred to PCC@UPLB last 2015.

A single bull provides various benefits such as draft animal power, additional meat, and a source of semen for breeding strategies. Beyond these gains, a bull’s contribution is indispensable in achieving a good and reliable herd of animals.

There are indeed many existing testimonies stating that it is best to use a bull aligned with several existing breeding strategies.

The purebred Philippine Buffalo bulls, developed by the Philippine Carabao Center (PCC), are not just active and well-built but also genetically superior as they possess extraordinary quality due to their improved bloodline.

By means of looking into the records of each bull under the care of PCC, those named “Zeus”, “Tomas” and “Dexter” have the highest estimated breeding values (EBVs) and are considered as improved versions of purebred buffalo breed, being products of successive backcrossing.

Currently, “Tomas” and “Dexter” are under the management of PCC national bull farm (NBF) in Caranglan, Nueva Ecija, while “Zeus” is vested in PCC at University of the Philippines-Los Banos (PCC@UPLB). The semen collected from bulls are systematically processed and utilized for artificial insemination (AI) of buffaloes in different areas of the country.

“It is important to maintain quality bulls that provide quality semen allotted for the simultaneous improvement of buffalo breeds in the country,” said Dr. Ester Flores, head of PCC Animal Breeding and Genomics Section.

As PCC creates its “sire directory”, identification of bulls including its breeds, measurement of traits and, potential for milk production through EBV for each bull became easy and accessible.

Looking into the EBV of bulls is very important for it has a huge contribution in multiplying the herdof high quality dairy buffaloes in the Philippines, which is a priority activity under the PCC’s Genetic Improvement Program (GIP).

The GIP activities are also under the supervision of Dr. Flores.

“This program aims to improve the genes of the bull to sustain an effective multiplication of high quality buffaloes beneficial for meat and milk production,” Dr. Flores explains.

Aside from EBV, the potential of parents’ bull was also considered in identifying these three genetically superior bulls. The factors looked into includes the ability of dam to provide higher milk yield and, for the sire, the number of calves produced.

According to Hernando Venturina, farm supervisor of NBF, most bulls are named after their caretakers; this perhaps is a result of their attachment to their domesticated buffaloes.

He added that each bull receives the same animal health management in the farm. Their farm practices mainly focus on assuring that the herd is within the recommended body condition score (BCS), and administered with regular vaccines and vitamins.

Zeus is measured with the highest EBV of 599.50. This bull was born at PCC at Central Mindanao University (PCC@CMU) last September 28, 2014 and then transferred to PCC@UPLB last 2015.

Based on the data recording of PCC, Zeus’ dam is capable of giving 7 liters of milk daily whereas its sire had 9 female buffalo calves.

Subsequently, still based on records, Dexter has an EBV of 565.53. This bull was born in PCC at Visayas State University (PCC@VSU) last September 23, 2015 then transferred to NBF in 2016.

Dexter’s dam is capable of giving 8 liters of milk daily while its sire also had 9 calves.

Furthermore, the third bull, Tomas, which is younger than the two mentioned, has an EBV of 456.23 and is born in PCC Genepool last October 4, 2014.

His dam can give 8 liters of milk daily; Tomas and Dexter’s sire refers to the same bull.

“The clearest explanation behind these good performances and high EBVs of bulls is because of its good breeds,” Dr. Flores said.

Similar to the potential or ability of the parents of these genetically superior bulls, a high EBV of buffaloes is considered as a major basis. Half of parents’ EBV for milking potential is inheritable.

However, as Dr. Flores explained, choosing the right combination of male and female buffaloes during mating has an important role in the breeding process that results in high EBVs among the calves produced. Eventually, the EBV traits of these bulls are mixtures of its sire and dam.

The GIP group comprehensively studies the genetic merits of two buffaloes used during breeding to produce calves with viable EBV causing female buffalo to have high potential for milk, while maintaining a high level of EBV for bulls.

To further improve PCC’s breeding system, the agency endeavors in related researches, which include the assessment of fertility rate among bulls with high EBV to assure the sustainability of quality semen production for widespread implementation of PCC’s AI services in the country.